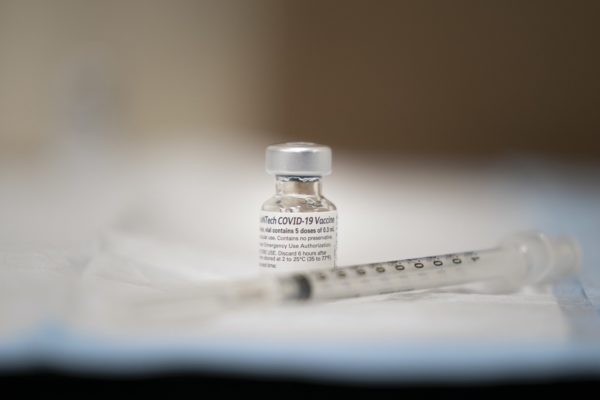 An additional 101 local cases were reported this morning, bringing the seven-day moving average to about 90 cases per day, the highest point in nearly two weeks. Five new deaths were reported, bringing Arlington’s cumulative COVID fatality count to 174, which is less than a tenth of a percent of the overall population and just over 2% of cases (8,222). 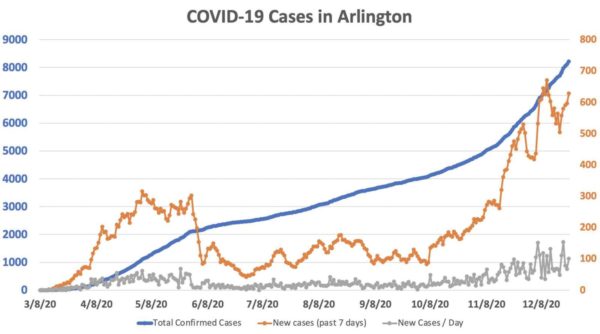 Encouragingly, Arlington now has its first doses of the COVID-19 vaccine.

The Arlington County Board got the news on Tuesday, about an hour after the Arlington Health District received an allotment from the state health department. The first doses will be given to healthcare workers, nursing home residents and staff.

“This is, I think, one of the brightest spots in this long nightmare of the pandemic,” Board member Katie Cristol said. “I can’t imagine that I am the only Arlingtonian who just breathed a sigh of relief listening to you describe what it means that our health care workers at Virginia Hospital Center and surrounding facilities are finally being reached by this vaccine.”

Arlington Public Health Director Dr. Reuben Varghese predicted that the general public could be inoculated as early as mid-2021, and that the timing for the next phase is up to VDH. He also said that the next phase of inoculations will likely be for essential workers, including first responders, law enforcement and grocery store workers.

“This will take time to put into place,” Varghese said. “Even though we know how to vaccinate, vaccinating with six foot distances with appointments is not something that we’ve all done before. So, we ask for your patience.”

The Moderna and Pfizer vaccines have 95% efficacy rate, but have not been tested on anyone under the age of 16. Side effects include muscle aches, soreness and fever.

Varghese also said that the health department will not collect citizenship information from those receiving vaccines.

“We’re not collecting that in any of our databases about who’s getting it and what their immigration status [is],” he said. “If you do that you will send infection underground, and you will not be able to control the spread. That principle has been maintained, and I’ve actually registered in the vaccine system and there was no status question.”