Broadcasting legend Larry King died on Saturday, at the age of 87. Though his status as a television celebrity is well established, less well known is where he rose to fame: here in Arlington.

King moved to Arlington from Miami shortly after his Larry King Show picked up national syndication from the Arlington-based Mutual Broadcasting System in 1978.

King’s show was produced in the Mutual Broadcasting studio at the top floor of the office building at 251 18th Street S., next to the Crystal City Metro station. Back then, the building’s street address was known as 1755 South Jefferson Davis Highway, the Crystal City Underground shopping plaza had recently opened, and the neighborhood was only beginning to emerge as a major commercial center.

“Mutual radio moved to Crystal City when no one was there and nothing was there — there were four buildings and the Crystal underground,” recalls Tammy Haddad, King’s radio producer in the early 1980s and later the founding Executive Producer of his CNN show.

It was from that studio that the late-night Larry King Show was broadcast across the country until it went off the air in 1994. Initially, it aired from midnight to 5:30 a.m., though the hours shifted over the years. The radio show featured an extended interview followed by live listener call-ins, and eventually aired on more than 500 radio stations nationwide.

The quirky program was a hit: King’s following grew so quickly — with millions of listeners staying up into the wee hours — that the open call-in portion of the show would crash the circuits of the entire 703 area code, at least according to King.

When Larry King Live launched in primetime on CNN in 1985, King would drive from the CNN studios in D.C. to Crystal City to host the radio show. Famous for his work ethic, King kept that grueling schedule up for years.

While working out of Crystal City, King lived in the Rosslyn area. For a couple of years he lived in The Virginian apartment building, before moving to the nearby Prospect House condo building, famous for its monumental view of D.C. and the Iwo Jima memorial.

King later briefly moved to McLean before decamping for Los Angeles, according to Patrick Piper, who produced King’s radio show after Haddad. (An Associated Press article from 1991 noted that King was arguing to have one of his divorces heard in Arlington “where he lives and works,” instead of Philadelphia where his estranged wife still maintained a residence.)

For one, King was cast as himself in the 1984 comedy classic Ghostbusters.

“The people filming the movie Ghostbusters called and asked me to play myself in the movie,” he wrote in his autobiography. “They shot me, cigarette in hand, behind the mike.”

While the setting depicted in the film was definitely the Crystal City studio, Piper wasn’t sure whether it was actually shot in Arlington or on a soundstage. It did look like one of the secondary studios in the office, he said. 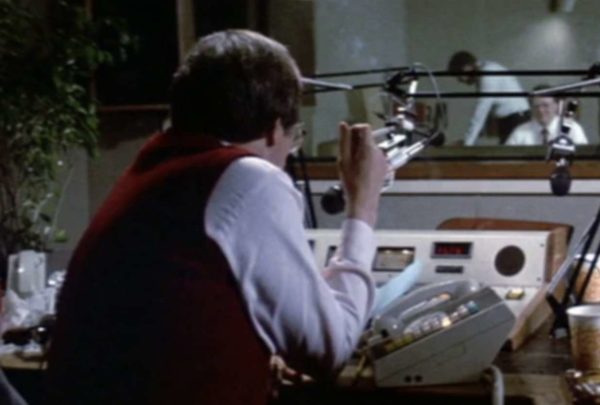 Getting to the studio late at night was not easy for the in-studio guests, Haddad remembers.

“The guests used to have to enter the Crystal underground entrance, which was unmarked, it never said Larry King radio show, it never said Mutual radio… and then they’d have to go to the building and [get] let up,” she said. “So you have to really want to be a guest on Larry King to get there.”

“We used to send the guests on Red Top Cabs,” Haddad said. “So we pick up Mel Brooks, Danny Kaye, you know, all these guys.”

One regular on-air guest was then-Congressman Al Gore, who lived five minutes away in the Arlington Ridge neighborhood and would drive himself over to the studio late at night.

“Al Gore and Larry had a special relationship,” Haddad said.

Crystal City might not have been as centrally located as downtown D.C., but King wrote that it helped him stay much more plugged in to national news and media than staying in Miami.

In the early 1980s he was asked by USA Today founder Al Neuharth to write a weekly column for the newly-launched paper, which was then based just down the street from his condo in Rosslyn. The column helped expose King to millions of readers who might not have been able to stay up late to listen to his show.

In 1981 the Americans held hostage in Iran were staying at the Marriott in Crystal City after finally being released. King sent staffers to the hotel and they were able to get one of the Marines who was held hostage to come on the air for an interview, according to his autobiography.

Haddad recalls going to the hotel bar to recruit some of the hostages as guests. Similar attempts were made when sports teams stayed in Crystal City hotels, she said.

While the labyrinth-like path through the Crystal City Underground to King’s studio confused many guests, one in particular navigated it with ease.

“Getting into that building was a real issue for guests arriving at 11 p.m.,” Piper recalled. “I remember G. Gordon Liddy was a guest and I was supposed to meet him outside the lobby, take him to the ground floor, where a card was needed to get an elevator to take the guest to the 12th floor.”

“I was standing outside looking for Liddy and at 10:55 p.m. [I] gave up and got back to the studio to find Liddy sitting in Studio A with Larry (no cell phones back then),” Piper wrote. “I said something about how did you get in here and Liddy responded with calmness, ‘This place ain’t that tough to get into.’ I had forgotten about his expertise with Watergate.”

One guest in particular had a profound impact on King’s career when he came for an interview.

“We tried for years to get Ted Turner as a guest,” Haddad said. “He was the biggest thing, not just [as the founder of] CNN but the greatest sailor… he won the [America’s] Cup.”

“So he finally agreed to come on. I finally get Ted Turner in there, Ted Turner pitches Larry King on coming to CNN and hosting Larry King Live,” she continued. “He’d already had the network up and running, but he thought he needed someone, a conversationalist, like Larry, who could really talk about the people that are making news… And Larry really, you know, saw it as a great opportunity.”

And thus was how King’s television career was born: in a dingy, smoke-filled studio in Crystal City.

Photo (3) via CBS News, photo (below) via Ghostbusters Wiki