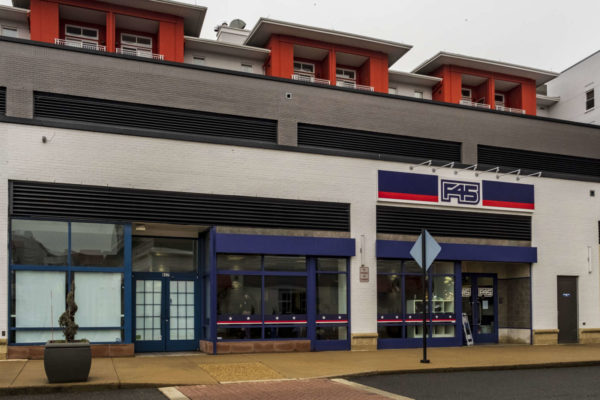 The new eatery will be located at Westpost, the shopping center formerly known as Pentagon Row, at 1101 S. Joyce Street. It takes the place of Aabee Express Mediterranean, which closed in August and was next to the F45 training studio.

Lucky Danger is hoping to open in April, according to Washingtonian, and will be takeout and delivery only. Unlike D.C., where Lucky Danger exists as a pop-up in Prather’s Alley in Mt. Vernon Triangle, the Arlington location is expected to be permanent.

The ease of drive-up for pickup and delivery drivers and the large parking lot, a Lucky Danger spokesperson writes ARLnow, is why the owners were attracted to Westpost.

There’s no sit-down capacity at the location, so Lucky Danger will remain only take-out and delivery.

According to Washingtonian, Lucky Danger has sold out of its food — a menu that includes classic Chinese-American takeout fare like sweet and sour chicken, duck fried rice and orange beef, as well as a “secret menu” of more traditional Chinese dishes — every day since opening in November.

Additional locations may be planned after opening in Pentagon City, the article suggests.

There has been significant turnover at the shopping center once called Pentagon Row.

Late last month, Origin Coffee Lab and Kitchen opened in what was formerly a Starbucks. Also in January, Irish pub Siné closed its doors and Unleashed was let off the hook. The shopping center’s Bed Bath & Beyond disappeared into the great beyond in September.

But Westpost has also become a somewhat unexpected location for pop-ups and buzzy restaurant concepts.

In August, Wild Tiger BBQ opened inside of Bun’d Up. In November, Napoli Salumeria debuted as a market concept version of D.C.’s now-closed Napoli Pasta Bar. While Champps closed earlier in the pandemic, it’s currently being converted into Nighthawk Pizza, a neighborhood gathering spot and watering hole that is set to open in the fall.

Nighthawk Pizza is a collaboration whose backers include local nightlife heavyweight Scott Parker. Likewise the duo behind Lucky Danger includes a restaurateur with prior Arlington experience: Tim Ma, who formerly helmed well-regarded Virginia Square restaurant Water & Wall, which closed in 2017.

“I’m overwhelmed by how much love this new concept has received since we opened as a year long pop-up just three months ago in D.C.,” Ma writes in a press release, “Now we have the opportunity to bring the full vision to life in a location in my backyard of Northern Virginia.”