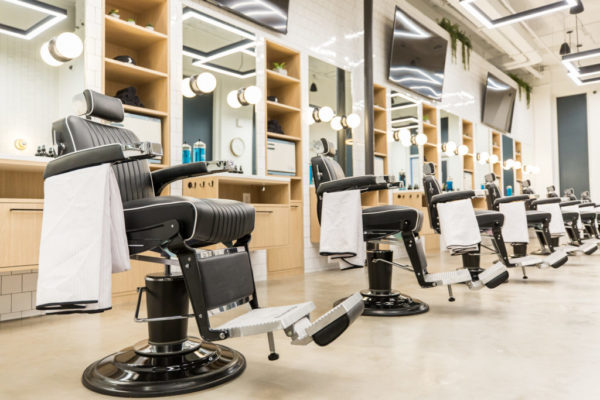 (Update at 11:50 a.m.) A new Bearded Goat Barber shop is opening in Shirlington this fall.

The full-service barber shop — from local entrepreneurs Eric Renfro, Jon Dodson, and Scott Parker — is opening its third location, at the Village at Shirlington. It will be located 4150 Campbell Ave, next to Samuel Beckett’s Irish Gastro Pub and across the street from Damn Good Burger Co.

It’s opening in the former Hair Cuttery space, which appeared to have closed during the summer. The ice cream shop next door I-CE-NY, which opened in October 2018 ,was listed for sale late last year.

“The Village at Shirlington is the ideal location for Bearded Goat Barber to open its third location,” writes co-founder Scott Parker in a press release. “Having opened our first shop in Ballston in 2019, and our second location in Navy Yard in Washington, DC this year, we are focused on neighborhoods that are future-focused, while retaining a certain charm.”

The barber shop will, of course, adhere to strict CDC guidelines, according to the release.

This includes santaizing workspaces, tools, chairs, capes, and waiting areas in between all visits. Masks are also required to be worn at all times by both patrons and employees, through the entire grooming experience.

The first Bearded Goat Barber location opened in Ballston about two years ago in 2019. It temporarily shut down last March due to the pandemic and re-opened in May with new safety and health guidelines in place.

The upscale barber shop is a partnership between two barbers, Renfro and Dodson, who were previously working at Clarendon’s Hendrick Barbershop, and serial local entrepreneur Parker.

Scott Parker is perhaps most well-known as a co-owner of popular bars and restaurants, including Don Tito in Clarendon, Bronson Bierhall in Ballston, and soon-to-be-open Nighthawk Pizza in Pentagon City.

He’s also co-owner of Bash Boxing, which also has two locations in Arlington. Another of his ventures, Clarendon’s The G.O.A.T., closed earlier this year.

END_OF_DOCUMENT_TOKEN_TO_BE_REPLACED

More Stories
Study: Arlington Is No. 2 in the Nation for ‘Budget-Friendly Dating’Ask Eli: State of the Arlington and Northern Virginia Housing Market