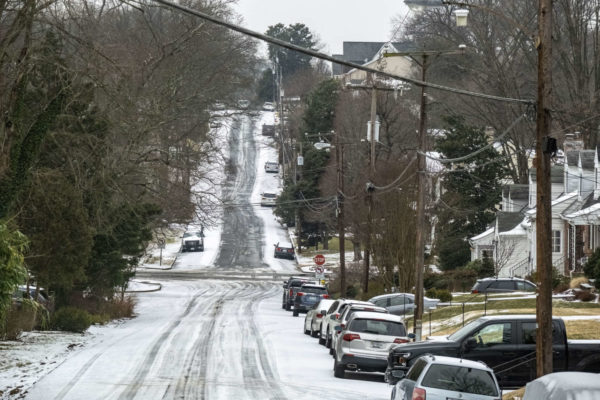 Be Careful Out There — “Northern Virginia crews continue to clear and treat roads overnight, for both some additional wintry precipitation as well as refreeze from low temperatures. Drivers are asked to continue to limit travel if possible, or to use extreme caution and be aware of the potential for slick pavement, even where surfaces appear clear or were previously treated.” [VDOT]

Doses May Be Delayed — “Virginia is seeing delays in this week’s vaccine shipments due to severe winter weather in the Mid-Atlantic region and across the country. The Virginia Department of Health says the state will likely see a delay in the delivery of approximately 106,800 doses, due to distribution channels in the Midwest and elsewhere that are currently shut down.” [InsideNova]

Architectural Review of HQ2 Phase 2 — ” It very intentionally does not look like anything else in Pentagon City or Crystal City, or anywhere else in the region. The style, a populist, jazzy take on high-tech modernism, isn’t aimed at architecture critics, but at the public, which shows remarkable forbearance to the predations of large corporations so long as they have a reputation for being innovative and forward thinking.” [Washington Post]

County Board Members Endorse Candidate — “Alexandria City Council member Elizabeth Bennett-Parker has picked up the endorsement of two Arlington County Board members in her quest for the 45th District House of Delegates seat. Board members Libby Garvey and Katie Cristol endorsed the candidacy.” [InsideNova]

New Spanish Publication on the Pike — “As part of its increased business support efforts, the Columbia Pike Revitalization Organization (CPRO) has launched a new publication dedicated to supporting the area’s Hispanic business community. The publication, Boletín, is a small booklet of resources and information specific to those Spanish speaking businesses serving Columbia Pike’s residents.” [CPRO]

Arlington Man Arrested for Armed Robberies — “An Arlington man was arrested last night and is facing charges in connection with a series of recent armed robberies. Detectives from our Major Crimes Bureau determined that in three of the four robberies, the suspect approached the victim, displayed a firearm and took their personal property. In the other case, the suspect took a victim’s purse by force.” [Fairfax County Police Department]