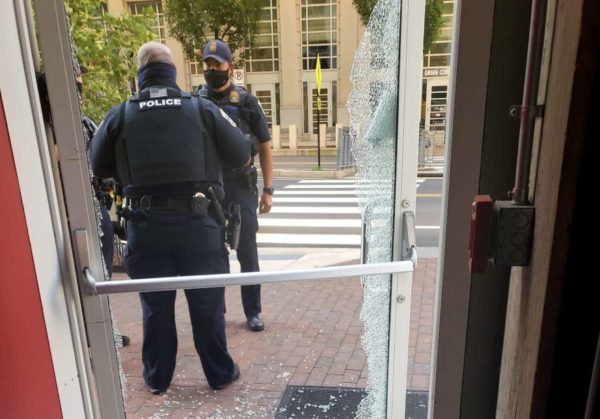 King of Koshary, La Union, Meridian Pint. These are just three of the local businesses burglarized among the 21 commercial burglaries investigated by Arlington County police so far this year.

ACPD confirmed today what was anecdotally evident: such burglaries have been on the rise.

The Arlington County Police Department’s Property Crimes Unit is investigating an increase in overnight commercial burglaries targeting cash-based businesses. Since the start of the year, detectives have investigated 21 reports of commercial burglaries in the County with similar methods of theft. Investigators believe that some of these cases are linked but not all are committed by the same suspects. Similar cases have been reported in neighboring jurisdictions and detectives are working collaboratively with our regional law enforcement partners to identify and apprehend those responsible.

During overnight hours, suspects force entry to businesses by smashing glass doors and windows. Once inside, the suspects are in search of cash and will remove registers and safes if they are not bolted down. The entire incident takes only minutes and the suspects flee in an awaiting vehicle.

There have been 21 reported incidents with 15 of those being completed burglaries and 6 attempted burglaries.

Many of the burglaries have been along Wilson Blvd or the Columbia Pike corridor and involve already-struggling restaurants. 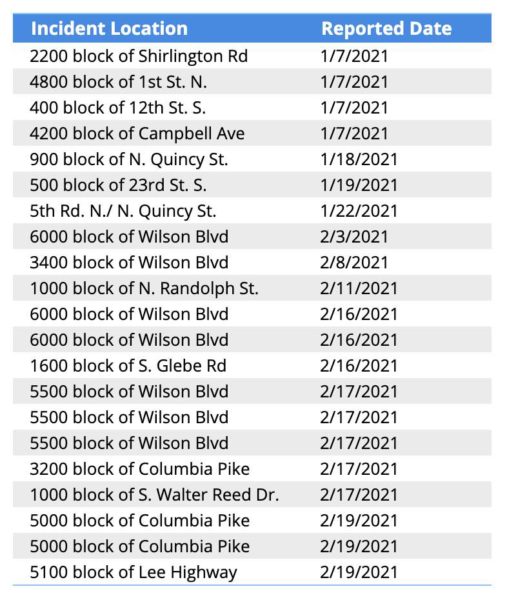 Among recent reported burglaries, ACPD spokeswoman Ashley Savage confirmed that the following — each involving a group of five suspects — are being investigated “as a series.”

BURGLARY, 2021-02170037, 1000 block of S. Walter Reed Drive. At approximately 8:45 a.m. on February 17, police were dispatched to the report of a burglary just discovered. Upon arrival, it was determined that between 3:33 a.m. and 3:37 a.m. on February 17, five suspects attempted to forced entry to a business, causing damage. The suspects fled in a red vehicle. Nothing was reported missing from the business. […] The investigation is ongoing.

BURGLARY (series), 2021-02190017/02190021, 5000 block of Columbia Pike. At approximately 3:55 a.m. on February 19, police were dispatched to the report of a burglary. Upon arrival, it was determined that at approximately 2:22 a.m. on February 19, five suspects forced entry to two businesses, causing damage. The suspects stole three cash registers containing an undisclosed amount of cash from Business One, and attempted to steal cash registers from Business Two unsuccessfully, then fled in a vehicle. […] The suspect vehicle is described as a burgundy Lincoln MKZ sedan with Texas license plates. The investigation is ongoing.

“The department’s efforts to prevent and solve crime are enhanced by the active involvement of residents,” police said. “Residents observing suspicious behavior in commercial areas, such as groups congregating outside closed businesses during overnight hours, should contact the Emergency Communications Center at 703-558-2222. If you see a suspect entering a business, do not approach them and dial 9-1-1 immediately.”

ACPD is investigating an increase in overnight commercial burglaries targeting cash-based businesses. To learn more about these offenses and ways to safeguard your business, visit our newsroom. https://t.co/uNiNwGojVn pic.twitter.com/CXLRiX6HHn