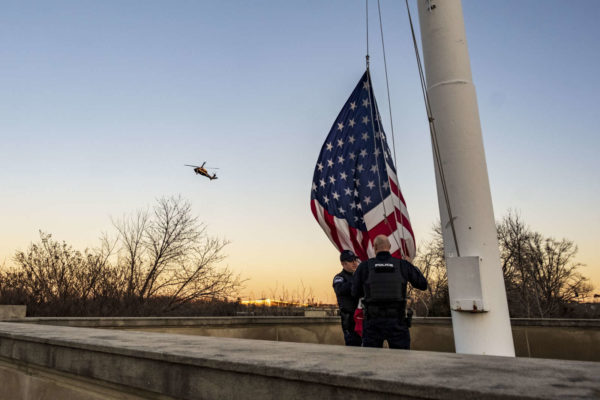 Rosslyn Dog Park Now Open — “Thanks to the support of the Rosslyn Business Improvement District and R-DOGS, there’s a new interim dog park on the western side of Gateway Park. Now that’s something to bark about!” [Arlington County, Instagram]

Arlingtonian Confirmed as U.N. Ambassador — “The Senate voted 78-20 on Tuesday to confirm Linda Thomas-Greenfield as U.S. ambassador to the United Nations.” The long-time Arlington resident “has promised to restore the U.S. role as a defender of human rights and will look to repair multilateral relationships that fractured under former President Trump.” [Axios]

Crashes on I-395 Yesterday Morning — From the Arlington County Fire Department: “The units from Station 9C ran a three vehicle accident early this morning on 395NB. Upon arrival, they discovered a trapped patient who was quickly extricated. Two patients were treated and transported with non-life threatening injuries.” [Twitter, WUSA 9]

YHS Students to Continue Athletics in College — “A dozen Yorktown High School athletes participated in recent college signing ceremonies to continue their playing careers at the next level.” [InsideNova]

Local Woman Sickened By New Puppy — “An Arlington mother and daughter are warning those interested in purchasing a new pet about a disease called campylobacter. Audrey Glitt was thrilled when her mother, Katrina Metzler, brought home a new puppy named Fernweh as a surprise — but shortly after the dog’s arrival, the excitement quickly faded to worry. ‘I think it was about, a week later after we had gotten her, I started getting really sick and I couldn’t get out of bed,’ said Glitt.” [WDVM]