(Updated at 11:50 a.m.) Will the proposed development for Landmark Block in Courthouse be the site of a “revolution” in urban living?

Arlington County says so. And developer Greystar Real Estate Partners appears ready to ignite this uprising, with plans to replace the aging, low-slung buildings on the 2000 block of Wilson Blvd — including the former Summers Restaurant — into an apartment tower surrounded by a pedestrian promenade and a curbless street.

But for some Planning Commission members, aspects of the proposal are not revolutionary enough, and one could be unsafe for pedestrians.

In 2015, the county published its vision for the square as an “attractive, accessible, and inclusive public space,” a sustainable 18-hour-a-day hub that celebrates Courthouse Square’s “rich history.”

The “civic and cultural heart of Arlington” will be flexible, innovative, sustainable and timeless, according to the 2015 Courthouse Square Sector Plan addendum. In short, the planning document said, Courthouse Square will be “where the revolution begins.” 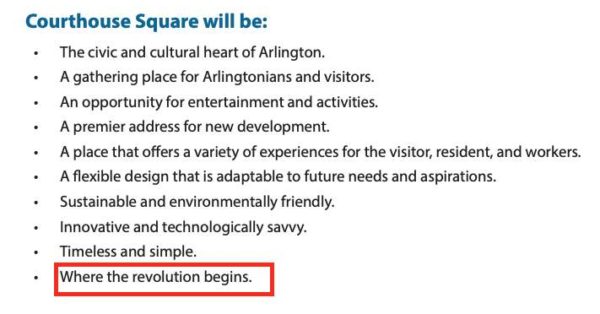 To lead the charge, Greystar needs approval from the County Board, which is slated to review the proposal on Saturday.

Greystar is proposing a 423-unit apartment building with ground-floor retail and underground parking. But this bread-and-butter project includes community benefits that will be “a truly landmark project,” said Nicholas Cummings, Greystar’s legal representation, during a Planning Commission meeting on Wednesday.

These is a proposed pedestrian promenade on N. Uhle Street that will lead to a revamped Court House Metro station entrance, as well as the shared, curbless concrete street on 15th Street N. 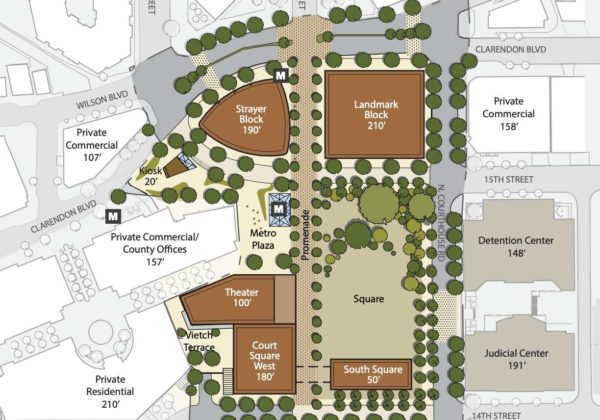 “The existing N. Uhle Street is harsh, with asphalt, no benches and minimal trees,” said Steve Smith, a principal architect for Cooper Carry, the architect for the project. “We’re excited about this opportunity to transform it into a fully [compliant with the Americans with Disabilities Act], pedestrian-only promenade, which provides increased tree-lined dining and public seating areas that activate the path to the Metro entrance.”

Meanwhile, 15th Street N. will be resurfaced and raised to create “a curbless table that blends into the sidewalk on both sides of the street,” he said.

Other community benefits include on-site committed affordable housing units, LEED Gold certification, a $800,000 contribution toward improving a future “Civic Square,” and $250,000 “for a public art installation in the square.”

As part of the County Board’s scheduled action this weekend, the Board is expected to authorize the sale of a key parcel on the block — 2049 15th Street N., the former A-SPAN winter homeless shelter — to Greystone for just under $1.75 million.

Planning Commission members and representatives of the Environment and Energy Conservation Commission (E2C2), the Parks and Recreation Commission and the Historical Affairs and Landmark Review Board lauded parts of the plan but raised additional concerns.

Kevin Vincent, of the E2C2 commission, said the 0.39 parking ratio was commendable but argued the building is not going to satisfy carbon neutrality and should have 50% of its parking be electric-vehicle ready, as opposed to the 15% as proposed.

Planning Commission Nia Bagley, reading comments from the parks commission, said members welcome the open space and pledged park contributions, but said Greystar should include more than one story of bird-friendly glass, to prevent birds from flying into the gleaming tower.

HALRB member Joan Lawrence applauded preservation efforts for the First Federal Savings and Loan Building at 2050 Wilson Blvd but criticized the approach to the Investment Building at 2049 15th Street N., which involves transplanting the building façade to the front of a new building.

Finally, commissioners Sara Steinberger and Devanshi Patel shared concerns about pedestrian safety on the shared, curbless 15th Street N., which Steinberger said currently is used by about 5,000 cars a day.

“I do really want to support this motion,” Steinberger said. “But I struggle with this being the appropriate avenue to have a shared street in Arlington — to make this the test case.”

Commissioner Elizabeth Morton said the future square will be a special gathering place and a fitting candidate for a shared street.

“The language in the sector plan said this is ‘where the revolution begins,’ so maybe we can consider it that way,” she said.