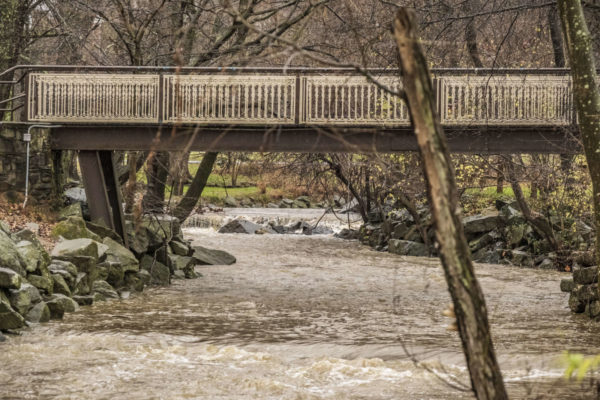 The County Board voted this weekend on an agreement with the City of Alexandria to dredge Four Mile Run in order to help mitigate flooding.

The neighboring jurisdictions will split the costs related to permitting, designing, construction, and dredging Four Mile Run, from around I-395 to the Potomac River.

“It’s time for us to undertake a joint dredging project so we can project that part of the county from flooding to the maximum extent possible,” said Arlington County Board Chair Matt de Ferranti at Saturday’s Board meeting.

The dredging — which will remove built-up sediment and debris from the bottom of the waterway — is expected to cost about $3.6 million, with each jurisdiction paying about $1.8 million.

The project is expected to get under way in the late summer or early fall, and will take approximately four months, Aileen Winquist of Arlington’s Dept. of Environmental Services tells ARLnow.

The work comes after the United States Army Corps of Engineers’ (USACE) most recent inspection report gave the state of Four Mile Run a rating of unacceptable. The Corps built a levee system along Four Mile Run in the 1970s and 80s to help with flood mitigation, after a series of devastating floods that inundated Alexandria’s Arlandria neighborhood.

The recent unacceptable rating from USACE was due to “excessive shoaling,” meaning the flood channel is too shallow and can lead to excessive flooding.

The areas around Four Mile Run have flooded a number of times over the past decade, including in 2011, 2017, and in 2019. Flooding two years ago was historic and caused some $6 million in damage to county property alone.

The needed improvements for the Long Branch Tributary will remain the sole fianincal responsibility of Arlington, since it’s within county borders. The budget for the entire project is about $4.7 million with Arlington agreeing to pay $2.56 million and Alexandria paying $2.16 million.