(Updated 4/5/21) Arlington Public Schools is preparing to release more information on its plans for getting students into classrooms during the current semester.

During the School Board meeting this Thursday, Superintendent Francisco Durán is slated to address updated K-12 school guidance from the Centers for Disease Control and Prevention, which was released on Friday.

“APS is reviewing the guidance to determine how the changes may impact our ability to serve additional students in person and improve transportation in the current school year,” Durán said in a School Talk email on Friday. “An update will be provided at the March 25 School Board meeting.”

The CDC now recommends that, with universal masking, students should maintain a distance of at least 3 feet in classrooms, down from the previous guidance of 6 feet. The change reflects “the latest science on physical distance between students in classrooms,” according to the CDC.

There are some exceptions: Adults should remain 6 feet apart from each other and students, and 6 feet should be enforced in common areas such as auditoriums, lobbies, the cafeteria during meals, and any time masking would hamper breathing, such as choir or band practice, sports practices and P.E. classes.

APS is currently enforcing 6 feet for children and adults who are learning in-person twice a week in a hybrid model. As of March 11, Durán said about 64% of students are in-person. The rest have either opted to stay virtual or are on waitlists pending more space. APS recently said it would finish the semester in the hybrid model current, before returning to five-day-per-week in-person learning in the fall.

If APS shortened the social-distancing minimum to 3 feet, waitlisted students should be able to get back into classrooms, School Board candidates Mary Kadera and Miranda Turner tell ARLnow. 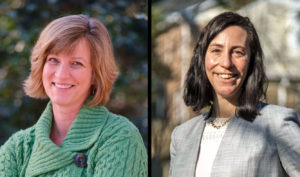 “I am encouraged that the CDC’s updated guidelines may provide the opportunity for students who are currently on wait lists to return to school,” Kadera said.

Turner agreed, saying that the new guidance “hopefully will be an impetus for APS to try and get more students in buildings this school year.”

Both candidates, who are seeking the Democratic endorsement in the School Board race, are awaiting more information from APS this Thursday.

“While we want to open our schools to all students who wish to return, we also have to remember what CDC guidance hasn’t yet changed, such as the requirement of 6 feet of distance between adults and students and 6 feet of distance in common areas, so I am interested to learn the details from Dr. Duran at this Thursday’s School Board meeting,” Kadera said.

Meanwhile, Rep. Don Beyer (D-Va.) has joined the chorus of people calling for returning more students to in-person learning this semester, which ends in June.

“I respectfully request that APS continuously review CDC revised guidance, and apply it to APS’s operational implementation for the current school year,” he said in a letter to Durán last week.

Beyer added that APS will receive $19.4 million from the recently passed American Rescue Plan Act to put toward reopening. The money is earmarked for items such as funding additional staff, implementing new testing protocols and supporting special-education programs as well as programs targeting unfinished instruction and social-emotional needs, he said.

On Friday, the pro-reopening group Arlington Parents for Education called on Durán to immediately apply the revised CDC recommendations. The group said the change would expand the current 11-student cap for buses, which it called “a misguided decision directly responsible for keeping kids out of school who want to be there.”

Relying on 6 feet of distance, it said, will “prevent Arlington’s students from receiving more than just two days of in-person instruction a week and from beginning the process of recovering academically, mentally, and socially, for the rest of the school year.:

Not everyone thinks a further reopening is the right move at the moment, however.

Christina Headrick, a parent from the Smart Restart APS advocacy group, told ARLnow on Monday that Arlington “should stay the course for the moment.”

“Let’s strengthen our return to school plans before increasing the density of occupants in our classrooms — and meanwhile continue vaccinating as rapidly as possible,” she said.

Many parents are not yet vaccinated, a number of teachers and staff are not fully inoculated, and there are still no definitive plans for outdoor lunches, she said. Further, APS has to brace itself for Spring Break.

“It would be reasonable to expect a surge in cases after Spring Break,” she said. “There were similar surges after July 4th, Halloween, Thanksgiving, Christmas, etc.”

And children are more likely to be asymptomatic carriers, she said, referencing the results of an antibody study Inova Health System, the Virginia Department of Health and George Mason University conducted. The researchers announced on Thursday that they found children were almost twice as likely as adults to have COVID-19 antibodies.

Further, the majority (66%) of children who had antibodies appeared to show no symptoms, which researchers said “highlights the silent or asymptomatic infection in children, and subsequent risk of transmission of infection to others.”

“We need to recognize that children will continue to be infected with and possibly asymptomatically spread this disease,” said Rebecca Levorson, MD, Division Director for Pediatric Infectious Diseases, Inova Children’s Hospital in a statement, emphasizing the use of masking, social distancing and vaccination.