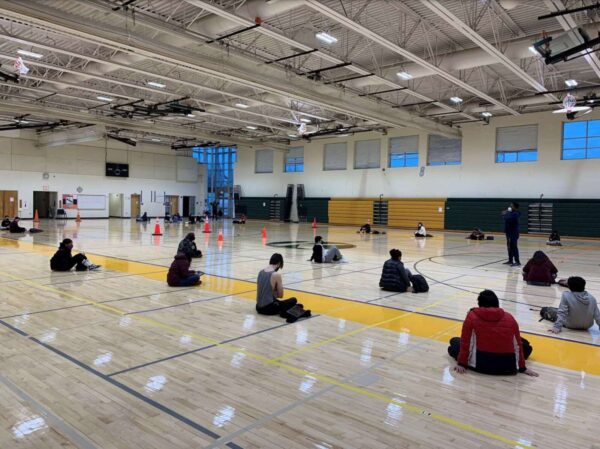 That’s unlikely to appease parents who want a quicker return to full-time in-school learning, however.

As announced last week, APS will be inviting more children — whose families initially opted out of in-person school in the fall and now want to return — to come to school twice a week in the hybrid model of instruction, as space allows on a school-by-school basis.

The push to incorporate more students responds to a change in social-distancing guidance from the Centers for Disease Control and Prevention, which now allows for three feet of distance between students in classrooms, though six feet is still recommended between adults and adults and students.

Nearby school systems are using the new guidance to add days of face-to-face instruction to the school week. Next Tuesday, Loudoun County and Fairfax County public schools will offer four days of in-person learning. This applies to all students in hybrid learning in LCPS and to identified students experiencing the greatest learning challenges in FCPS. (The Fairfax County plan has faced some criticism.)

Most Falls Church students, meanwhile, are now back in classrooms full time.

“We are absolutely doing that in the fall,” Superintendent Francisco Durán assured Arlington School Board members during their meeting last week. “We are headed to five days in-person in the fall. All of our planning now until then will be dedicated to that. That will be the sole plan we are working on.”

A number of parents who spoke at last week’s School Board meeting called for more days of in-person instruction this spring. In some cases, they also called for the resignation of Durán and certain School Board members.

“COVID-19 shows that the problem in Arlington is leadership is lacking,” said Paul Brickley. “The board must pursue the removal of the superintendent and the chief of staff for cause… Should the board not act, Arlington parents who care about the state of public education should immediately pursue a recall petition for [the board members] here since the start of the pandemic began. Should either course prove unworkable, parents should take to the streets using available peaceful means.”

While many Arlington students are in two day per week in-person learning, those in countywide special education programs report to schools four days a week. Between 41% and 51% of students, on the other hand, are still fully virtual.

The rates of opting for distance learning are higher among Arlington’s more vulnerable populations, Durán noted.

“I’ve heard from some principals as they’ve reached out to families that they still want to remain in distance learning,” he said. “We know that our English-learner population — particularly our Latino population — has had more exposure to the coronavirus and that particular community does not feel safe coming back to school.”

Overall, English learners and economically disadvantaged students are more likely to be in full distance learning than the overall APS student population, according to a snapshot of enrollment by instructional model, shown below. 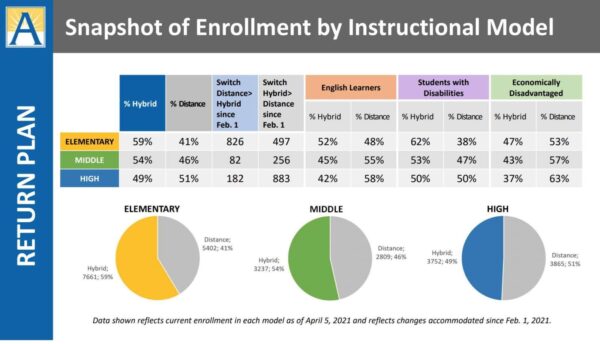 At one school — Carlin Springs Elementary School — Durán said 80% of families are choosing to remain in distance learning.

“It’s really important to understand the nuance that there are significant variances among zip codes in comfort with coming back into in-person learning,” School Board Member Cristina Diaz-Torres said. “A lot of students are working to support their families or are taking care of younger siblings during the day and are just experiencing a different reality than some of our other students are experiencing.”

Gabriela Uro, who is part of an association of Latino APS parents, said the network of 600 Latino families she speaks with are very concerned about returning to school. Many parents worry their children could bring home the virus and infect a working family member, making it harder to put food on the table and pay rent.

More than 80% of people who responded to a Spanish-language survey her group sent out said their No. 1 concern with return-to-school is getting sick, with a number concerned about whether staff and students would comply with safety strategies.

“The level of anxiety was palpable,” she said.

A majority of parents who responded expressed no concern with virtual learning, although some worry about grades, screen time, the lack of socialization and stress, she said. Parents are in a tough position because while they worry about these things, she said their “first and foremost concern is safety.”

“I know they care about academics,” Uro said. “But they are focused on survival on a whole different level.”

Older children are stepping up, taking on gig jobs and foregoing college — or the college application process — to take care of younger siblings and help with school, she added.

But the group has not been vocal in the return-to-school debate because it has chosen different battles, Uro said.

“We have to prioritize our community and their needs,” she said.

There’s hesitance to return to classrooms among at least one other major immigrant group in Arlington.

“A lot of the Ethiopian community is not confident — on the other hand, it’s been a burden to have the children at home while working at the same time,” said Christy McCaw, the Resource Development Manager at the Ethiopian Community Development Council.

Many parents are taking a “wait and see” approach, she said.

The push now will be getting the 45% of students who are still virtual to return this fall, said School Board Vice-Chair Barbara Kanninen. She called on APS to “be more proactive” reaching out to families, explaining APS’s mitigation measures and moving students into hybrid instruction where space allows.

Durán said the school community will be re-surveyed in the future to gauge instruction preferences as feelings may have changed now that the vaccine is more widely available.

END_OF_DOCUMENT_TOKEN_TO_BE_REPLACED

More Stories
Community Matters: We Have Been Challenged!Just Reduced Properties in Arlington