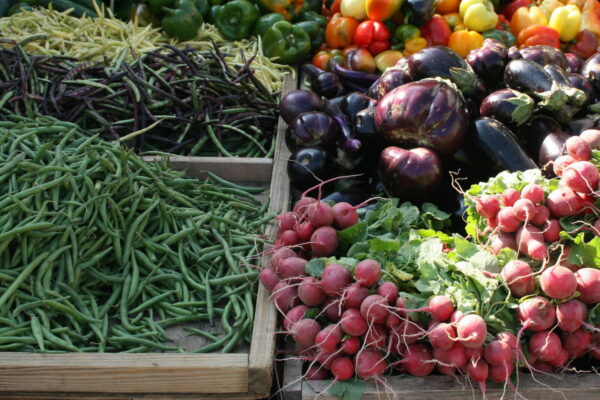 A new farmers market may be coming to Pentagon City.

On Saturday, April 17, the County Board is planning to hear a permit request from the National Landing Business Improvement District about holding an open-air farmers market at the plaza area in the northern portion of Metropolitan Park, about 2-3 blocks from the Pentagon City Metro station.

The farmers market would take place on Saturdays, April through November, from 8 a.m.-noon. However, the market would not start until June this year, National Landing BID spokesperson Ashley Forrester tells ARLnow.

The reason for the delay, writes Forrester, is so that the BID can do more planning in advance and set themselves “up for success in future years” for when there’s a new park.

Metropolitan Park is on the verge of getting a $14 million makeover courtesy of Amazon and its new, adjacent HQ2, with design work from James Corner Field Operations of New York’s High Line fame. That project is expected to be completed in 2023.

The market will be operated by Freshfarm Markets, which runs nearly 30 markets in the D.C.-area including four in Arlington.

If approved, the market would be able to accommodate up to 20 vendors, who would park along 13th Street S. and S. Fair Street.

The staff report notes that the area around Metropolitan Park contains several high-rise, multi-family apartment buildings, so they expect most patrons to the farmers market will likely walk or bike there.

The County Board will review the use permit for the farmers market again in a year, April 2022.

This additional market would give Arlington nine active farmers markets, a number of which have opened or will be opening in the coming weeks.

Pre-ordering is still being encouraged as a safety measure, but all the markets are open for in-person shopping. It’s a change from early last year when markets were briefly shut down due to the pandemic and, then, allowed to reopen only for pre-order sales.