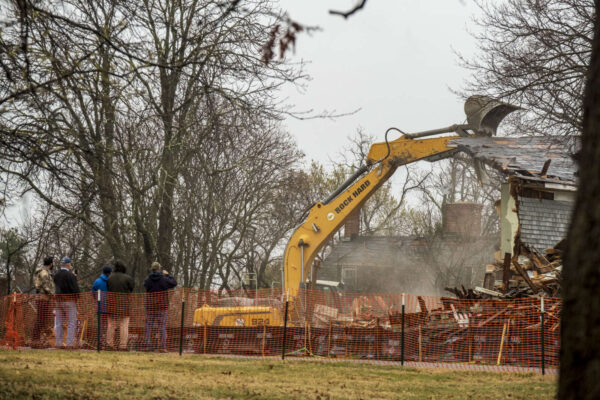 In a rear wing of the Febrey-Lothrop Estate in Dominion Hills, there was an ornate wooden compass floor inlay built into what had been a library.

Like the windows, decorative ornaments and columns, it had been part of the original 1859 home that had seen Civil War soldiers, servants and national celebrities come and go over the years.

All these architectural embellishments were destroyed, and according to the Arlington County Board, any historical merit that could have justified a proposed local historic district overlay went with it.

The County Board voted unanimously at a meeting this past Saturday to reject the Historical Affairs and Landmark Review Board (HALRB) recommendation to give the area at 6407 Wilson Blvd with a historic designation.

During the meeting, Cynthia Liccese-Torres, the coordinator for Arlington County’s historic preservation program, ran through what photos and information the county could obtain before bulldozers took the main house and the estate’s other buildings down.

Liccese-Torres said many of the interior sections of the house were in fair condition and many of the architectural details could have been salvaged both in the section of the house that dates back to 1859, an outbuilding from 1898, and a bungalow on the property from 1910.

But they weren’t saved, and Liccese-Torres said with the buildings now torn down, there was little left to convey the historic significance of the property.

Over the last few months it was clear that saving the property was a long shot, with the county’s bureaucratic process for preservation far outpaced by the by-right demolition permitting the homeowner was entitled to. For Tom Dickinson, a local activist who helped lead efforts to preserve the house, the whole process was a failure of county leadership.

“This did not have to happen, but the County Board, county manager and county staff allowed it to happen without the slightest effort at intervention,” Dickinson said. “Our reasonable expectations for total preservation just weeks ago has been utterly destroyed and permanently denied.”

The site was identified in the Parks Master Plan from 2019 as a site for a potential park, despite its proximity to Upton Hill Regional Park, and Dickinson blasted the County Board for waiting until demolition was imminent to make a show of listening to the preservation concerns.

“This board delayed two months, giving the owner time to get permits and knock the building down,” Dickinson said. “Even worse, when the owners failed to live up to their promise to give staff access to the property to document it, this county’s leaders let them get away with it.”

Dickinson attributed the existence of photos and research completely to Liccese-Torres, who obtained the historical information despite a total lack of support from county leadership. At the meeting, county leaders praised Liccese-Torres for capturing what little photographic evidence of the home she could with bulldozers outside, ready to tear the building down.

James Schroll, representing the Planning Commission, lamented the loss but agreed with staff that the demolition of the buildings meant the historic overlay wasn’t feasible anymore.

County leadership defended themselves in the meeting, saying they didn’t have very many legal options to save the home or interfere with the demolition permitting process.

“I’ve seen a lot of members of the community have opinions about this,” said County Attorney Stephen MacIsaac. “The designation really is a zoning overlay. The property owners are able to use their property in accordance with the zoning ordinance.”

MacIsaac said the owners were within their right to seek demolition, and the courts would compel the issuance of a demolition permit if the requirements are met.

“I was pretty persuaded that there wasn’t a way we could delay that demolition legally,” said County Board member Libby Garvey.

“To ignore the will of the owner is fundamentally flawed,” said Colucci, “especially when the owner was the owner of that tenure and the proceeds will go to other charitable purposes in Arlington.”

Overall, County Board member Katie Cristol said it was disappointing that the whole process ended up where it did, especially in contrast to the unanimous approval of the Mount Salvation Baptist Cemetery’s historic designation.

Instead, the county is belaboring the idea that the only way to do preservation is “over the objections of property owners,” she said.