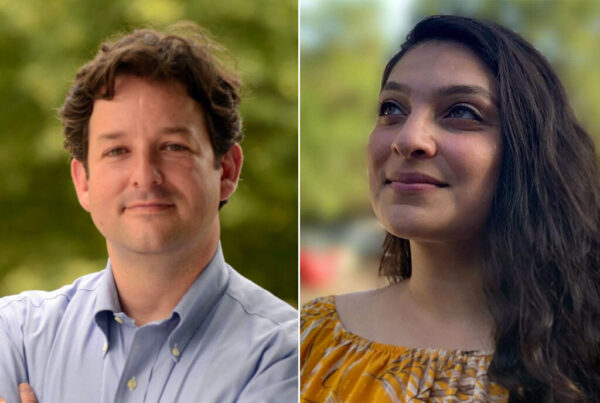 It could be a competitive Democratic primary in Virginia’s 49th House District between long-time delegate Alfonso Lopez and newcomer Karishma Mehta.

Since announcing her candidacy in October, Mehta has received several notable progressive endorsements including from Democratic Socialists of America, Sunrise Virginia, and Our Revolution Arlington. She’s also raised a considerable amount of money, with her campaign saying they’ve so far raised five times more than previous 49th District challengers.

Mehta has been running an active campaign, sending her supporters more than a dozen emails since mid-March. The emails have asked for donations, announced endorsements, and demanded that corporations like Dominion Energy and Amazon — which is building its HQ2 within the 49th District — “are immediately reigned in.”

Lopez, meanwhile, has racked up endorsements from a proverbial who’s who list of Arlington and Virginia lawmakers, officials, and organizations. That includes U.S. Sen. Tim Kaine, Virginia Secretary of Education Arif Qarni, the Arlington firefighters union, and even his primary challenger in 2019, JD Spain, president of the Arlington branch of the NAACP.

The 49th District runs from Seven Corners to Pentagon City, including much of Arlington’s diverse Columbia Pike corridor.

The primary is set for June 8, with early voting starting tomorrow (April 23). The race pits an established Arlington lawmaker against a first-time candidate .

Mehta is a 29-year-old preschool teacher, the daughter of Indian-American parents who immigrated to the U.S. seeking a better life. But they struggled, she tells ARLnow, to pay rent, get affordable health care, and pay down debt. While she originally hails from Tennessee and Pennsylvania, she moved to Arlington about a decade ago to teach.

Mehta says she is “proud to help represent the wave of progressive insurgents across the country working to put people first, not corporations.”

“I’ve seen a cyclical pattern and the lack of accountability not just in our elected officials, but in the way we’ve created society,” she says. “My goal is to help be part of a new generation of legislators that help break that cycle of inequity, to help build new systems that uplift all of our people.”

Lopez was first elected as a Delegate in 2011. Since then, he’s become the Majority Whip in the Virginia House of Delegates and has sponsored a slew of notable bills, including one earlier this year that gave localities greater say over which businesses get liquor licenses.

This past General Assembly session his entire legislative agenda was signed into law, including bills related to gun control, providing more access to financial aid to students no matter immigration status, and funding to improve water treatment plants and prevent Chesapeake Bay pollution.

Lopez tells ARLnow that he believes his experience getting legislation passed is why he continues to be the best candidate for the job.

“What I do is bring Arlington progressive values to Richmond and work to get as much I can done, to move the policy needle as far as I can while also being successful and effective in getting legislation passed,” he says.

Speaking with both candidates, it’s clear there’s a brewing divide over what constitutes being a progressive in Arlington in 2021.

Mehta classifies herself as a progressive, while several times alluding to Lopez not being in tune with where Arlington and the 49th District is headed politically.

“My story is the story of so many people who live here in the 49th District,” she says. “We are fighting to expand our electorate to bring in new, young people and people of color into the political process.”

Lopez, who is Latino, is a bit bewildered by these charges, though does recognize there’s been a bit of a political shift of late.

“I’m a solid Arlington progressive. Three years ago I was the most liberal member of the House of Delegates, according to the Virginia Progressive Legislative Action Network,” he says. “This year, I’m the tenth most progressive. I haven’t changed.”

Mehta has pledged not to take any corporate money for her campaign, something she says Lopez has done. She accused Lopez of taking “thousands from private health insurance companies” and “real estate developers” in the past.

To these statements, Lopez responded, “If someone donates to my campaign, they’re buying into my agenda, not the other way around.”

When asked about what they love most about Arlington and the 49th District, they both cited the diversity and togetherness of the community.

“No matter how transient people feel Arlington is, we have a love and sense of community that encourages me to keep fighting,” Mehta says. “I feel like, in the almost decade of living here, I’ve never felt alone. I’ve never felt isolated.”

“In the Columbia Pike corridor and the 49th District, it’s a world in a zip code,” Lopez says. “It’s not just ethnic and national diversity, it’s also socioeconomic diversity, and that’s what’s wonderful about this area… I adore representing my neighbors and my friends.”