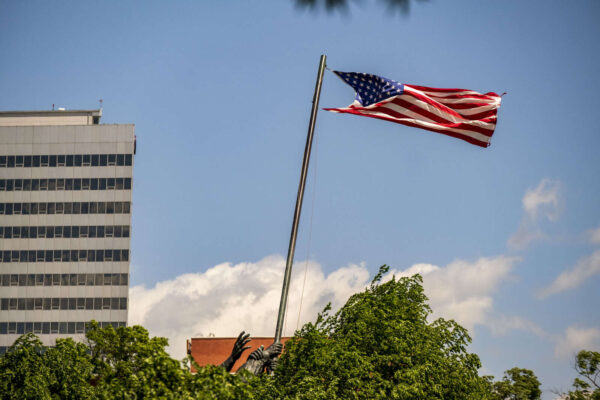 Update at 11:45 p.m. — Outages in Arlington are down to about 600 customers, according to Dominion.

Update at 5:55 p.m. — Dominion reported approximately 48,000 customers without power in Northern Virginia, including nearly 6,300 in Arlington, as of 5:30 p.m., though those numbers are starting to come down slightly.

There are large reported outages in the Shirlington, Fairlington, Green Valley and East Falls Church areas. There are reports of trees that fell into buildings, including houses and a garden apartment building.

#Alert We are responding to multiple calls for service and prioritizing life threatening emergencies. Calls for downed trees, stuck elevators and downed power lines are being addressed as units are available.

Huge tree down blocking one lane on N. Glebe Rd in Arlington. Part of the tree also damaged the roof of the nearby apartments. Thankfully no one is injured. @nbcwashington pic.twitter.com/E7VuMWfOf7

Update at 5:10 p.m. — There are multiple reports of trees and wires down around Arlington after 50-65 mile per hour wind gusts swept through the county. Power is reported out in several neighborhoods and a tree is reportedly blocking a portion of N. Glebe Road near N. Pershing Drive.

As a result of a high volume of calls, the fire department has temporarily reduced its standard response to certain types of alarms, according to scanner traffic.

@ARLnowDOTcom power out in parts of south Arlington, definitely Shirlington

Earlier: Arlington is under a Severe Thunderstorm Warning as a “wall of wind” arrives from the west.

On an already breezy day — amid a High Wind Warning — the storm front could cause power outages and fell trees.

* At 438 PM EDT, severe thunderstorms were located along a line extending from Montgomery Village to near Chantilly to Warrenton, moving east at 65 mph.

IMPACT…Damaging winds will cause some trees and large branches to fall. This could injure those outdoors, as well as damage homes and vehicles. Roadways may become blocked by downed trees. Localized power outages are possible. Unsecured light objects may become projectiles.

For your protection move to an interior room on the lowest floor of a building.

445p: Rare situation with severe tstorm warning and little rain and no thunder but the winds are fierce. pic.twitter.com/yBWzVTOTCF