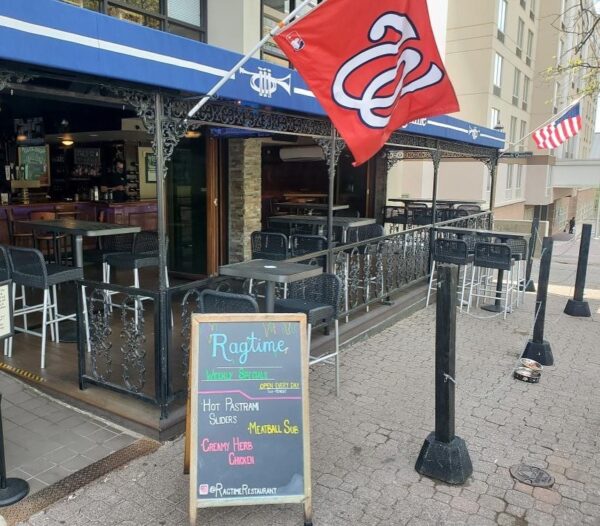 Ragtime in Courthouse may be getting a huge break on rent thanks to the Arlington County Board.

On Saturday (May 15), the Board is expected to vote to amend the county’s lease with the long-time local restaurant that would reduce Ragtime’s rent during the on-going pandemic “to a level that it can afford to pay.”

Ragtime is located at 1345 N. Courthouse Road, on the ground floor of an office building purchased by the county in 2012. It leases the 5,000 square-foot space, now owned by the county but previously owned by a private landlord.

Ragtime first opened in 2001 and is owned by Vintage Restaurants, which also runs Rhodeside Grill on Wilson Blvd and William Jeffrey’s Tavern on Columbia Pike.

Ragtime’s business has declined “precipitously” during the pandemic, the county staff report details. In April 2020, sales were less than 10% of normal. Although business has increased in recent months, it remains 50% below normal, the report says.

Due to the drop in sales, Ragtime is unable to pay rent at the rate called for in the current lease, which was signed in 2013 and expires in 2026, according to the county.

“When sales decline substantially below normal, inflexible overhead like employee salaries and utility charges does not decline to the same degree, and accordingly absorbs a greater percentage of sales,” says the report. “This leaves a smaller percentage of sales that can be applied to rent.”

As a result, an agreement was struck that would reduce Ragtime’s rent to the equivalent of 9.5% of its gross sales (as long it doesn’t exceed its base rent rate, which is approximately $19,000 a month).

“As a rule of thumb, restaurants can afford to devote roughly 10% of sales to the payment of rent,” the report notes.

That rate would remain in effect until the restaurant has two consecutive months in which 9.5% of gross sales exceeds its base rent, or for one year after the lease amendment is signed, whichever happens first.

The reduced rate is being backdated to April 2020, and Ragtime is being allowed to hold off on paying back rent.

“Ragtime will begin paying the discounted back rent (based on 9.5% of gross sales) when their sales return to normal,” the staff report says. “This discounted back rent will be payable monthly over a one-year period. The actual revenue impact to the County in FY 2021 and FY 2022 is dependent upon Ragtime’s gross sales as well as the timing of when their sales return to normal.”

“The total estimated revenue shortfall compared to budgeted amounts in FY 2021 and FY 2022 is approximately $100,000,” the report adds.

ARLnow has reached out to Vintage Restaurants for comment, but has yet to hear back as of publication.

There’s also another tenant in the 2020 14th Street N. building that the county owns: Courthouse Deli.

When asked if the county is working on a similar arrangement with that business, a county spokesperson declined to comment specifically due to confidentiality.

“We have worked with all County tenants that have requested relief due to pandemic-related hardship,” wrote a county spokesperson.