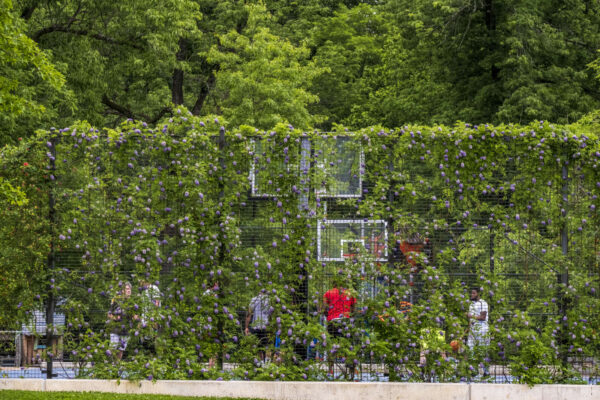 Cherry Trees Planted in Pentagon City — “We are so excited to be celebrating with @CherryBlossFest and @amazon the planting of 12 Japanese Cherry Trees in #NationalLanding! Thank you for these beautiful new additions to the area!” [Twitter]

Renderings of Possible DCA Bridge — “JBG Smith Properties isn’t waiting to envision the future. In a video released to investors this month, the company showed off some 3D renderings of what a pedestrian bridge could look like, complete with some features that have not yet been showcased publicly for the project. There’s a small set of amphitheater-like steps for lounging on the bridge, for instance, plus some futuristic-looking coverings for people walking along the structure. There even appear to be bike lanes and greenery pictured at points along the bridge.” [Washington Business Journal, Vimeo]

Arrests in Malicious Wounding Case — “Officers located the vehicle the suspects were traveling in and conducted a traffic stop at the intersection of eastbound Route 50 and N. Courthouse Road… Inside the vehicle, officers recovered three loaded firearms including a black handgun with extended magazine, AR-15 style rifle and a shotgun.” [ACPD]

Feds May Permanently Expand Telework — “As the Biden administration contemplates how to return the massive federal workforce to the office, government officials are moving to make a pandemic experiment permanent by allowing more employees than ever to work from home — a sweeping cultural change that would have been unthinkable a year ago.” [Washington Post, Washingtonian]

Virtual Chamber Ensemble Performance — “The National Chamber Ensemble will present a virtual performance of Vivaldi’s masterpiece The Four Seasons on May 29, 2021. The 2020-21 NCE season has been keeping the audience and artists safe as well as connected. Each concert is paired with a live virtual event/conversation with the artists. Taped May 22, the concert links will go out on May 29.” [Event Calendar]