(Updated at 11:10 a.m.) A pair of Columbia Pike businesses say they’re planning to leave when their leases are up due to parking challenges at a county-financed garage.

Lost Dog Cafe and Joule Wellness Pharmacy both tell ARLnow that relatively high and confusing parking fees in the garage are costing them thousands of dollars a year in customer business. The owners of both say they will not be renewing their leases when they expire come 2023 and 2024, respectively.

“This parking issue has made it so untenable,” says Lost Dog Cafe franchise owner Jim Barnes. “We link this to our sales and our sales are not good. There’s a correlation with this parking lot.”

The parking garage, located at the corner of Columbia Pike and S. Walter Reed Drive, is owned by Ballston-based apartment developer AvalonBay. However, it was built based as part of an unusual 2006 agreement with Arlington County.

The county contributed $2.96 million to its construction with the promise of receiving 45% of parking revenue as a form of payback every month going forward, according to the “public parking development agreement” obtained by ARLnow.

It is one of only two parking garages in the county that has an agreement of this nature, county officials confirm, with the other also along Columbia Pike, at Penrose Square.

The agreement does not specify a duration for which the county will continue to receive the parking revenue and county officials declined to provide an “interpretation” of whether that could mean into perpetuity.

They also didn’t specify how much revenue the garage generated for the county in 2020.

The parking garage is owned by AvalonBay and was acquired by the company with its $102 million purchase of the since-renamed Avalon Columbia Pike apartment building — formerly the Halstead Arlington — in 2016.

While this agreement had been in place for a decade and a half, initially signed by a different developer, a majority of the issues for the businesses started in March 2020, just days before the pandemic began to hit Arlington.

That’s when, according to Lost Dog and Joule Wellness, the parking machines were turned on and enforced for the first time in years.

Lost Dog Cafe, a franchisee of the original in Westover, moved into 2920 Columbia Pike in May 2009. At the time, Barnes said that parking was free after 5 p.m. and on weekends, which he says was an adequate compromise. A large portion of their customer-base came when parking was free anyway, with the garage able to earn revenue at other times, he says.

When AvalonBay purchased the building, notes Barnes, those restrictions went away and the parking machines were turned off. Enforcement also stopped.

Then four years later, with little notice according to the businesses, the machines were turned back on, enforcement restarted, and parking fees were being charged 24/7. The machines require drivers to pay for parking in advance, and anyone who fails to do so — or who overstays the amount of time they paid for — gets ticketed or towed.

A sign outside the garage advertises a parking rate of $1.75 per hour, which can be paid via a cash-only machine inside the garage. Barnes claims the machine “has never worked” and “steals people’s money.”

Drivers can also use the ParkMobile app, but poor cell phone reception in the garage makes that difficult, and the app charges $2.25 for the first hour.

“Customers cannot use their phones to access it infuriating them and they simply choose to no longer come to our business as a result,” Barnes said.

Paid street parking is available nearby, but is limited. Parking on surrounding neighborhood streets, meanwhile, often requires a residential decal, and nearby parking lots are restricted to other businesses and their customers. 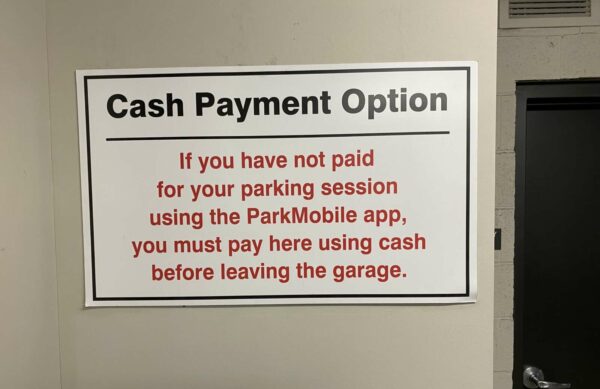 AvalonBay, in an email to ARLnow, disputes Barnes’ version of events, writing that parking was being collected prior to March 2020.

“Equipment had been in place and parking revenue was collected prior to March 2020,” writes a company representative. “In March 2020, an updated parking system was installed with the County’s approval.”

Barnes, however, says that he received “no notice whatsoever” about the change or any updates.

The management of Joule Wellness Pharmacy, which opened its Pike location in early 2014, said they did receive notice, but it was only two to three weeks prior to the change. What’s more, they said there’s no mention of paid parking in their lease.

“There was not no mention of that in our lease,” says manager Alex Tekie. “And in fact, we’re told parking is free for us and our employees and for customers coming on the retail side.”

Tekie and pharmacy owner Winnie Tewelde tell ARLnow they now shell out nearly $800 a month in parking, mostly so employees can park in the lot.

They’ve talked a lawyer about the situation, but grew weary of paying even more money to fight the parking changes against a large, publicly-traded developer.

“We got exhausted. Drained,” says Tekie. “It’s David vs. Goliath.”

Each business says their employees have received tickets and threats of towing. Barnes says that he’s heard directly from customers that paying for parking and the threat of a ticket has dissuaded them from patronizing his business. Paid parking also gets mentioned in reviews of the restaurant (below). 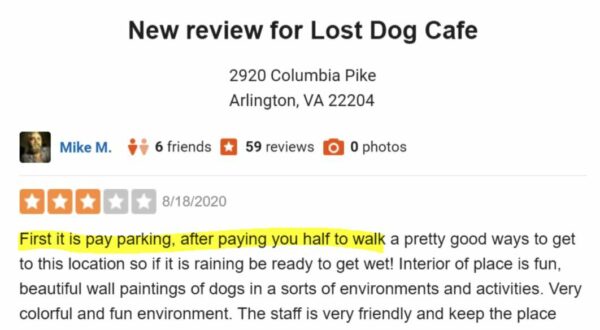 In addition, there seems to be ample confusion about which entity is actually in charge of operating and managing the parking garage. 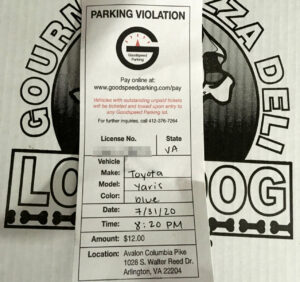 Both Barnes and the pharmacy’s managers say that they heard from AvalonBay that the county has tied its hands in terms of fees, charging, and enforcement.

But officials — including county parking manager Stephen Crim and a spokesperson for the Department of Environmental Services — wrote in an email to ARLnow that AvalonBay is responsible for the operations and management of the parking garage, including ticketing, towing, and payment.

Later, AvalonBay confirmed that it is, in fact, in charge of the garage’s operations and management with a third-party hired by the company doing the ticketing and towing.

Either way, Barnes believes that his business deserves to have parking subsidized in some way, either by the county or AvalonBay. Making the first hour of parking free, he suggested, could at least solve the problem of parking fees driving customers away.

This type of public parking agreement between a private developer and the county is highly unusual and one that likely would not happen today, County Board Vice Chair Katie Cristol tells ARLnow.

“It is almost impossible for me to imagine, as a Board member, supporting using general fund dollars or a general fund-backed loan to help construct what is almost entirely private parking,” she said. “It is counter to our adopted policies about managing parking and managing public parking as a public asset.”

She speculates that the 2006 County Board approved this deal in an effort to help the Pike redevelop, particularly to assist and plan for more commercial development.

Cristol says that she’s spoken to Barnes numerous times about the situation. She believes there are, at least, partial solutions to this in the form of establishing fair monthly parking rates for employees and instituting short-term pick-up/drop-off zones or spaces for customers.

“We want to be as supportive as possible of small businesses,” CPRO Executive Director Kim Klingler writes ARLnow in an email. “We are actively working with the County to find ways to provide parking relief for tenants and alternative short term parking options and/or [pick-up/drop-off zones] for customers.”

But, in terms of the county subsidizing parking, that’s not going to happen.

“The policy question is, should we subsidize retail parking in one spot in the county for a couple of retailers where everywhere else we charge for parking?” Cristol asks. “I don’t think that’s consistent with our policy and, especially, I really don’t think it’s fair to the hundreds of other small businesses around the county for whom we try to manage public parking in a thoughtful way.”

When asked whether AvalonBay would like to address these tenant concerns and if they had any recommendations about how to make this situation more palatable for both the businesses and the company, the company responded: “We have heard from some current and prospective retail tenants that paid parking can be a deterrent.”

All of this comes as Columbia Pike is on the cusp of big changes. A number of development projects are in the works along the Pike, including Westmont Shopping Center, where Rappahannock Coffee currently stands, and Fillmore Gardens Shopping Centers. The 16M bus line, a high-frequency, one-seat ride connecting Skyline to National Landing, remains on the docket to be implemented in the 2023 fiscal year.

But all of this change and development, along with the lingering effects of the pandemic, could start to push some long-running Pike businesses out. It’s already started to happen with the closing of Mom’s Pizza after three decades and Cynthia’s Bakery II further down the Pike.

And it now appears that three more businesses are also set to depart the Pike.

A nail and hair salon is currently up for sale, according to a recent sign posted on a window at 2920 Columbia Pike. ARLnow has not been able to reach its owners.

While Barnes says that monthly employee parking and pick-up/drop-off zones would be helpful, it doesn’t change his stance that Lost Dog Cafe will no longer do business on the Pike. Joule Wellness Pharmacy is also planning its next move.

“We have absolutely no reason to renew our lease,” says Tekie. When asked if it was due to the parking situation, Tekie was unequivocal. “One hundred percent.”