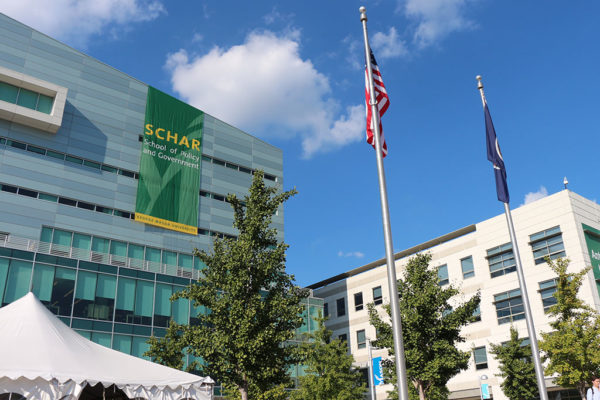 GMU is part of a network of a dozen universities and research institutions that have been studying substance abuse across the U.S since 2019 with funding from the National Institutes of Health. Most of the campuses in the NIH’s Justice Community Opioid Innovation Network (JCOIN) conduct research, but GMU’s center has a different focus.

Now, the center will be nearer to the Center for Advancing Correctional Excellence!, which oversees the opioid research center.

“JCOIN is an exciting research enterprise to address the problems of substance abuse among individuals in the justice systems,” said Faye S. Taxman, who leads both centers. “The new location will help us continue break new ground in building the next generation of workforce scientists and clinicians in a field that is vitally important to society.”

Over the last year, opioid-related overdoses have ticked up in Arlington County. According to an annual report from the Arlington County Police Department, police investigated 74 fatal and non-fatal overdoses in 2020, the same as were reported at the peak of the opioid epidemic in 2017.

That trend appears to be continuing in 2021. Last Tuesday, ACPD sounded the alarm on heroin and fentanyl-laced prescription painkillers after it investigated three overdoses in one day — two of which were fatal. As of last week, first responders have administered nasal Naloxone, also known as Narcan, 31 times to reverse an overdose.

“While the investigation into these incidents revealed no direct evidence that the increases are fueled by the COVID-19 pandemic, it is likely a factor given the timing, the loss of income and jobs and the isolation of stay-at-home orders,” the ACPD annual report said.

Arlington County received more than $1 million in state and federal grants in January to help fight the opioid epidemic with more staff and treatment options, as well as more Naloxone kits. Meanwhile, the county is fighting back in the courts, suing pharmacies and businesses that it alleges are key players in the epidemic.

Meanwhile, GMU is working to expand its Arlington footprint, with a new building at 3401 Fairfax Drive in Virginia Square, where the old Kann’s Department Store used to be.