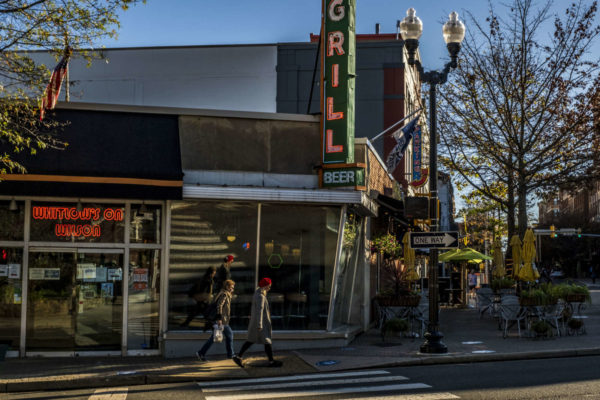 Whitlow’s recently closed in Clarendon, with hopes of opening elsewhere, but its former space will not be vacant for long.

The owner of the building at 2854 Wilson Blvd, which was unable to negotiate a lease renewal with the long-time local watering hole, appears to be dividing the restaurant — which includes a basement, a ground-level floor and a rooftop bar — into at least three separate tenant spaces, according to building permits.

The first tenant is likely to be Five Guys.

The burger chain confirmed to ARLnow that it will be opening a new restaurant in Arlington, but the opening is not expected until next summer.

“We’re a bit far out to confirm any dates, but we’re intending to open a new location in Arlington around summer 2022,” said Five Guys spokeswoman Jessica Lloyd.

The company has grown from one Arlington burger joint in the soon-to-be-redeveloped Westmont Shopping Center to an international chain with more than 1,400 locations in the United States alone. It currently has two Arlington restaurants: one down the street in Courthouse, at 2300 Wilson Blvd, and another at Reagan National Airport.

Permits posted in the windows, bearing the project name “Five Guys,” indicate that the property owner is first planning an asbestos abatement.

So far there’s no word on what else might open in the building, nor whether Whitlow’s is closer to finding a new location.

So it looks like Five Guys is going in the Whitlow’s spot? Plus one or two other tenants it looks like. @ARLnowDOTcom pic.twitter.com/GCOzdddmyx