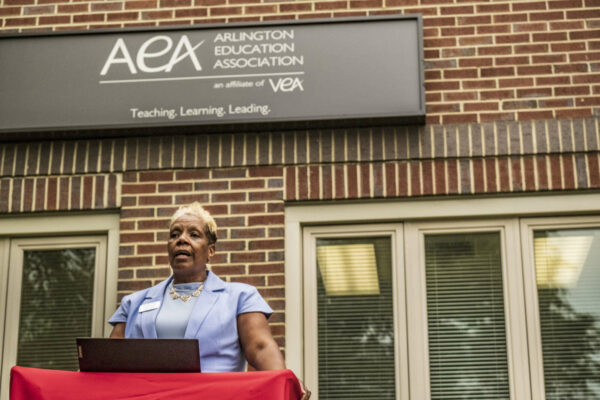 This school year, when most students returned to their brick-and-mortar buildings, others continued online learning through the newly-created APS Virtual Learning Program.

Four weeks in, staff say that the program still has deep problems, in addition to the staffing shortages which ARLnow previously revealed. We’re told by teachers that the issues range from communication to teacher treatment to a lack of needed resources.

“Every day our educators are being forced to go above and beyond the call of duty,” Arlington Education Association President Ingrid Gant said during a press conference yesterday afternoon on the steps of the union’s headquarters along Columbia Pike. “We, the members of AEA insist the School Board members take action regarding the poor state of communications, staffing and support across APS, particularly in Virtual Learning Program.”

She outlined a variety of concerns, including missing textbooks, incomplete schedules, inadequate substitute coverage, and programming for special education students and English learners, as well as abrupt teacher transfers and long work days.

In response, APS spokesman Frank Bellavia said the school system has not yet had a conversation with AEA about these concerns.

“We welcome that dialogue and have been transparent about the challenges with the Virtual Learning Program and the steps we are taking, as well as the timeline for the distribution of summer school bonuses,” he said.

A number of teachers — some speaking on the condition of anonymity for fear of retribution — tell ARLnow that they feel abandoned. They say there are no regular faculty meetings, emails to administrators go unanswered, and new teachers do not know where to turn to for instructional support and lesson plan help.

“Everything is falling on the teachers to make it work, with no leadership whatsoever. Where is the leadership? Where is the support? There’s no community, nothing,” said one secondary teacher.

“Communication has been dreadful,” said a special education teacher. “It has gotten better, but it has a long way to go. It’s not just with administration, but with home schools as well.”

Bellavia suggested that VLP staff struggling with internal communication issues use the same paths available to other employees.

“As is the expectation for all APS staff, they should start with their administrator to seek help or express concerns,” he said. “If they continue to have concerns, teachers are welcome to reach out to Office of Academics content supervisors or directors.”

Educators also say they’ve been moved to other positions within the program but have not had instructional support or tools to develop lesson plans. Veteran teachers say they’re grateful to have years of experience and their own resources at their disposal in order to get through the myriad of problems.

In one instance, seven teachers signed up to teach English learners were reassigned to teach whatever else they had certifications in — from elementary classrooms to specific high school subjects — in order to address shortages. Teachers tell us that this hasn’t been good for morale.

“Based on teacher credentials, teachers were placed in classes for which they were certified to teach or reassigned to a brick and mortar school​, as necessary,” Bellavia confirmed.

Up until this week, staff say they did not know who within or outside the VLP to consult for instructional help, absences or problems with students’ schedules. Each physical school has support staff and administrators equipped to handle these problems, but the chain of command in the VLP has not been clear, they say.

In contrast, Bellavia said VLP has support staff, including a math coach, a reading coach, a counselor and an assistant administrator. Teachers have been informed about available resources and can begin picking up items at APS headquarters.

“A counselor? What counselor? I don’t think that’s accurate,” the secondary teacher said in response.

Still, she said, “I’m not going to give up. I’ll keep beating my head against the wall until things change.”

A group of parents with children in the VLP backed up this assessment.

“Federally-mandated special education services are still not being provided to many students and home schools are not stepping in to fill the gap, there remains a lack of permanent teachers in some grades and parents report substitutes are still not providing age-appropriate instruction,” the group told ARLnow.

In addition, some students still don’t have complete schedules and some don’t have classes, we’re told.

“Not once yet this year has [my son] had a meeting with a teacher in his math class,” said Josh Folb, a teacher who’s also an APS parent. “I am lucky that I am a math teacher, so I can teach him some things. There are middle and high school teachers throughout the county who have offered to step up to teach an extra class (for extra pay, of course) but it does not appear that APS has availed themselves of the willing talent they have.”

“Now, he doesn’t have an English teacher,” Folb said.

The program’s temporary director, Amy Jackson — who abruptly replaced the previous administrator earlier this month — addressed the ongoing problems in a video message to families on Sept. 11. She promised “clear and consistent communication channels” going forward, with weekly emails and videos every Saturday.

“I do understand the frustrations that your students don’t have a schedule that is consistent,” she told families. “If a class is not staffed right now with a substitute or permanent teacher, your student will see a message from me giving them activities to do during the week. Many of our students are doing a fantastic job with that — I appreciate what they’re doing with that as well.”

The parent group said it has seen some recent improvements, including more permanent teachers, better communication with families, and issues with class schedules being addressed.

“We remain hopeful that APS will provide VLP with the resources it needs to be a success, and that depends first and foremost on providing teachers capable of providing both mandated and age-appropriate instruction,” the group said.

Jay Westcott contributed to this report

END_OF_DOCUMENT_TOKEN_TO_BE_REPLACED

More Stories
JUST IN: Firefighters on Scene of Kitchen Fire at Dama RestaurantWhat’s Next: A Path to Undergrounding Our Power Lines