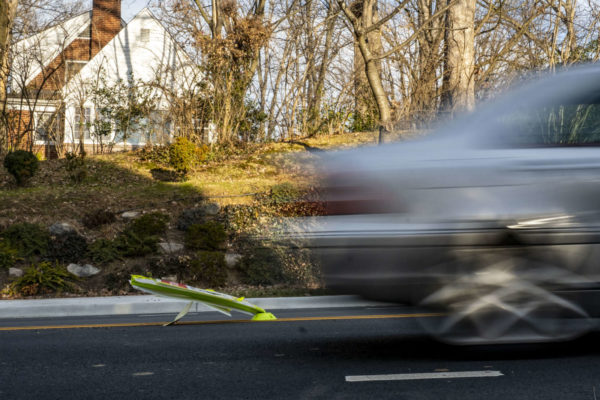 Arlington County’s transportation division is kicking off its ambitious plan to eliminate traffic deaths with a series of relatively quick safety projects.

For now, most of those projects appear to be in North Arlington.

Four months ago, the Arlington County Board adopted a five-year action plan that aims to eliminate traffic fatalities and severe injuries, known as “Vision Zero.” The plan lays out a systematic approach to safety improvements, addressing the most urgent needs through data analysis, equity and community engagement.

“We’re focusing initially on small-scale operational improvements… a small but important part of program,” said Dennis Leach, the director of transportation for the Department of Environmental Services.

Residents will see upgrades such as curb and median extensions, improved bus stops, curb-and-gutter repairs, new ramps and new high visibility crosswalks. DES has already completed eight “quick-build” projects and 11 are underway, according to its website.

Staff identify projects by analyzing crash data and considering reports by police, Arlington Public Schools and community members. They are constructed on a rolling basis.

For example, this month, staff completed a new mid-block crosswalk across N. Ohio Street that will improve access to Cardinal Elementary School and Swanson Middle School School. Staff are now installing a crosswalk with accessible curb ramps over Sycamore Street for better access to Tuckahoe Park and Tuckahoe Elementary School.

Of the 19 completed and under-construction projects, only three appear to be in South Arlington. One Twitter user mapped out the geographic spread of these projects, raising questions about how these projects are chosen and when DES will make its way south, given that equity is a core tenant of Vision Zero.

I mapped all of the @arlingtondes Quick-Build Vision Zero program projects in progress or completed. This is the primary program getting some extra paltry funding for safety.

Leach said that could be because there are a number of older community and school requests being worked through.

Transportation and Operations Bureau Chief Hui Wang said these projects are “a very small, skewed piece of the transportation program” because they don’t show large-scale investments, such as those on Columbia Pike.

“When we’re talking about balance, equity, we have to make sure that we’re not looking at it through a shaded lens,” she said.

“[Columbia Pike] is our single largest focus areas, as it has some of our oldest infrastructure,” he said. “In other parts of the county, like the Rosslyn-Ballston corridor, private development builds a lot of the infrastructure. In Columbia Pike, until recently, there’s been little private development — there’s more now — but it’s been left to county to actually make those investments in advance of redevelopment.”

When asked if certain communities generate more traffic reports than others, Wang said DES doesn’t map out community reports because it’s hard to categorize them and her team doesn’t have the resources for that.

“My team is focused on the engineering part — our goal is trying to get things done,” she said.

The data-based approach helps weed out what is a perceived safety risk versus actual safety risks, Wang noted.

“We use crash data to identify real problems,” she said. “We’re using data as a guiding force, focusing on high-injury networks.”

Chris Slatt, who is president of transportation advocacy group Sustainable Mobility for Arlington County, said it’s not surprising that initial projects will skew toward North Arlington.

“Complaint-driven processes are well-known to reflect the biases of whom within the community is best equipped to spend precious time and energy complaining, so we would fully expect that method of identifying projects to skew toward the more affluent areas of Arlington unless staff works intentionally to correct that bias,” he said.

Crash data may skew geographically, as well, he said.

“The far-north sections of Arlington are notably more car-dependent and auto-centric, so they’re more likely to have the kind of road designs that increase crashes,” he said.

Slatt commended the Vision Zero team for other equity work, such as including Gunston Middle School and Hoffman-Boston and Drew elementary schools in a pilot program targeting slow streets near schools.

“Equity analysis is baked into the Vision Zero plan, so if it does turn out over time that equitable distribution is not being achieved, we’re confident that the Vision Zero team will identify it and make process corrections as necessary,” he said.

“We have extra work to do to reach parts of our community that are busy and might not have time to attend meeting,” he said. “Some of our residents have more time sending us emails or putting in inquiries. For us, it’s all about balance, being thoughtful and equitable, and delivering services to the communities that need it most.”

More Stories
Having Conquered Long Distance Running, Michael Wardian Takes a Swing at PickleballStatutes of Liberty: What is Marriage for Immigration Purposes?