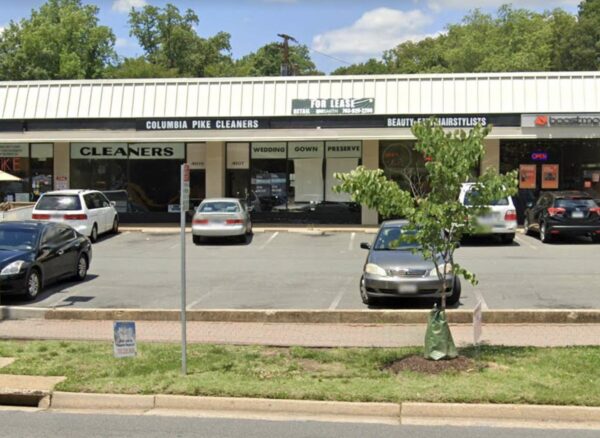 (Updated at 10:25 a.m.) A new pizza place is opening on the Pike, in the shopping center at the intersection with S. Randolph Street.

Papa Deeno’s Pizza at 4109 Columbia Pike is expected to open in mid-December, in the space formerly occupied by Columbia Pike Cleaners, according to its co-owner and a county staff report.

On Saturday, the Arlington County Board granted the restaurant a permit to allow for food delivery. It passed in the “content agenda” with other items considered non-controversial.

Papa Deeno’s will have 12 indoor dining seats, along with restrooms, but it’s expected that about 30% to 40% of sales will come from delivery, according to the report.

The website, which looks to be about half-completed, describes the pizza parlor as “family-owned” and the dream of the family’s youngest daughter. Additionally, the entire menu is halal “so that everyone can enjoy our delicious creations.”

The shopping center at the intersection of Columbia Pike and S. Randolph Street takes up nearly 34,000 square feet and was constructed in 1962, the county report notes.

It’s unclear when Columbia Pike Cleaners closed, but local dry cleaning businesses have struggled to stay afloat during the pandemic as many customers have avoided going to the office or dressing up for formal occasions.

END_OF_DOCUMENT_TOKEN_TO_BE_REPLACED

More Stories
Langston Blvd sign replacement project expected to wrap up in a couple of weeksArlington Pet of the Week: Karma