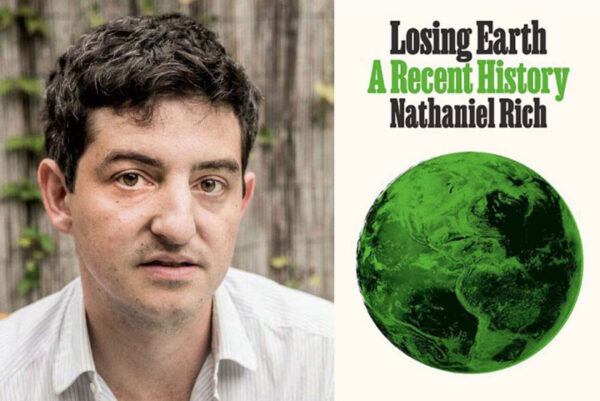 This column is sponsored by Arlington Arts/Arlington Cultural Affairs, a division of Arlington Economic Development.

Arlington Public Library invites you to join an online conversation between the novelist and essayist and Library Director Diane Kresh.

The event is supported by EcoAction Arlington, a County program which also has been a community partner for Arlington Art Truck projects rooted in issues of sustainability, will share tips and resources during the YouTube premiere.

By 1979, we knew nearly everything we understand today about climate change — including how to stop it. Over the next decade, a handful of scientists, politicians and strategists, led by two unlikely heroes, risked their careers in a desperate, escalating campaign to convince the world to act before it was too late. Losing Earth is their story, and ours. In its emphasis on the lives of the people who grappled with the great existential threat of our age, it made vivid the moral dimensions of our shared plight. Now expanded into book form, Losing Earth tells the human story of climate change in even richer, more intimate terms.

Nathaniel Rich is the author of Losing Earth: A Recent History (MCD/Farrar, Straus and Giroux, 2019), a finalist for the PEN/E.O. Wilson Literary Science Award, and a winner of awards from the Society of Environmental Journalists and the American Institute of Physics. He is also the author of the novels King Zeno (MCD/FSG, 2018); Odds Against Tomorrow (FSG, 2013); and The Mayor’s Tongue (Riverhead, 2008). Rich’s short fiction has been published by McSweeney’s, Esquire, Vice, the Virginia Quarterly Review, and the American Scholar; he was awarded the 2017 Emily Clark Balch Prize for Fiction and is a two-time finalist for the National Magazine Award for Fiction.

Register here to watch on Arlington Public Library’s Youtube channel, where you can enter to win a free copy of Rich’s book!

END_OF_DOCUMENT_TOKEN_TO_BE_REPLACED

More Stories
Arlington Pet of the Week: Lily and DaisyThaiphoon in Pentagon City expected to close this weekend, to be replaced by a “taco temple”