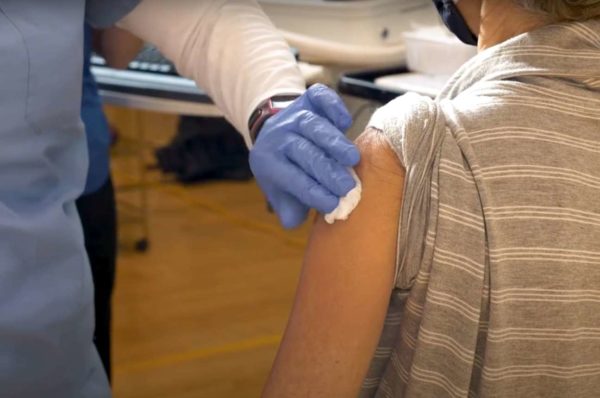 A group of Arlington County first responders and staff from other departments are petitioning the county to reverse course on its vaccine mandate.

Those who elect not to get the vaccine risk losing their jobs come February, per the county’s updated vaccine policy, shared with ARLnow.

Arlington County mandated vaccines for all government employees back in August, requiring those who were unvaccinated to submit to weekly testing. Since then, the county added a deadline to its policy: unvaccinated employees have until Feb. 1, 2022 to get the vaccine or get a medical or religious exemption. Those without a vaccine or an exemption on Feb. 1 will be placed on leave, and if they obtain neither before Feb. 28, 2022, they lose their jobs.

Some 278 of 3,137 permanent county employees are unvaccinated, including an unknown number of religious or medical exemptions, according to Public Health Division spokesman Ryan Hudson.

Those requesting the county to change its policy are asking for “more reciprocal ideas” for ensuring employee health and safety. The petition, started by firefighter Sterling Montague, has garnered nearly 300 signatures, from employees and their friends and family.

“More people came out in the last week than I ever knew of who are in support of the guys who don’t want to get the vaccine,” Montague tells ARLnow, adding that the coalition represents different demographics and opinions, including those who are vaccinated but oppose mandates.

“We aren’t uniformly anything,” he said. “We are anti-mandate for lots of reasons… [and] we have a diverse group that includes African-Americans and Hispanics.”

The petition says the mandate disproportionately harms people of color and it’s unclear what recourse folks have if those forced to take the vaccine suffer side effects. Objections to the shot, meanwhile, include that it was designed for a previous version of the virus and only protects for a short period of time and wanes, requiring an unknown number of additional boosters.

The county maintains that vaccines are safe and the best protection against COVID-19 — something echoed by the vast majority of doctors and public health professionals.

Rather than terminate up to 10% of employees — while the county faces ongoing and predicted workforce shortages among first responders and in other county departments — the petition suggests affordable, at-work tests for unvaccinated folks and those who report to work with symptoms while counting previous COVID-19 cases towards immunization.

Testing isn’t cheap. For the last three weeks, that testing has cost the county about $7,300 per week, but it’s 100% reimbursed under the White House’s COVID-19 Disaster Declaration, Hudson said.

Those opposed to the mandate say these temporary solutions are important as the pandemic and the vaccines evolve and because they’re worried few who applied will be granted religious and medical exemptions.

“It’s like they’re trying to fire us before things change,” Montague said. “If, in a year, this is the same, you’d have a year more credibility to fire us, but it doesn’t make sense to fire us as soon as possible.”

Leaving jobs with the county is easier said than done, Montague notes.

“We could all transfer to Fairfax County for an additional $15,000 a year, but we don’t because we’re invested here: These are the people we know, this is where we have our retirement and pensions,” he said.

Firefighter Kevin Riordan says about 55 of the nearly 380 uniformed and non-uniformed fire department personnel were not fully vaccinated the last time he checked the numbers. He said many would take masking and paying for testing themselves over losing their jobs, since they’re already masking when interacting with the public, regardless of vaccination status.

He says the mandate is “a slap in the face” to those who responded to house calls and tended to sick residents in 2020.

“I hate to use term ‘hero,’ but when we’re being lauded as heroes not just from the Pentagon but from when the pandemic originated — people thanking us, sending us food — now it’s a complete 180 because we’ve decided not to get the vaccine,” said Riordan, who responded to the Pentagon on 9/11.

“I am concerned about exposure, increased risk for those individuals not yet vaccinated, their co-workers, the community, and workforce readiness,” he told ARLnow, in a statement. “Requiring vaccinations as a condition of employment enhances employee safety, much like the provision of quality gear, decontamination facilities and Kevlar vests is meant to make the job a safer one — much safer than the one performed when there were no vaccines.”

Schwartz said he won’t consider natural immunity because public health experts and studies from the Food and Drug Administration and the Centers for Disease Control and Prevention have concluded it’s not as effective as being fully vaccinated. Some studies have demonstrated natural immunity wanes after 90 days.

Unvaccinated folks can seek religious and medical exemptions, he said.

“I play no role in determination of these accommodations,” said Schwartz. “I encourage anyone who submits an accommodation request to accurately represent their medical condition and religious beliefs. To do otherwise would itself be a breach of faith with our community and co-workers.”

The petition and the deadline come as COVID-19 cases in Arlington have returned to levels last seen in February 2021, which the county links to Thanksgiving gatherings and says could persist amid the flu season and the winter holidays.

In neighboring jurisdictions, the deadlines have not always gone to plan. In Montgomery County, first responders and public school teachers predicted vaccine mandates would result in mass terminations and the school system later backed away from a mandate.

In D.C., thousands of firefighters and medical workers still had their jobs weeks after the deadline passed to get vaccinated or get an exemption.

END_OF_DOCUMENT_TOKEN_TO_BE_REPLACED

More Stories
What’s Next: Be the change you want to see in the worldJust Listed in Arlington