Sandwich and salad spot Poppyseed Rye is revamping its menu and bringing on a new chef in the kitchen and as a partner.

Greg Lloyd, who worked as Executive Chef at D.C.’s busy Le Diplomate since 2016, is now the Ballston restaurant-slash-flower-shop’s chef and managing partner. 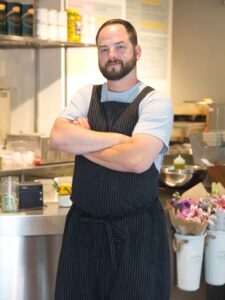 “At Le Diplomate Greg oversaw a kitchen team of 125 people, and ran one of the busiest kitchens in Washington,” a press release notes. “Prior to Le Diplomate he ran Parc in Philadelphia and Buddakan in [NYC], other properties of restaurant magnate Stephen Starr.

“This is a dream addition to our team. Greg’s talent and tenacity know no bounds,” said Poppyseed Rye partner and local serial entrepreneur Scott Parker. “He’s someone we’re looking forward to growing with, and he has revolutionized our offerings at Poppyseed Rye. We’re really thrilled to bring one of D.C.’s top chefs to Arlington, and specifically Ballston.”

Lloyd said in a statement that he wants to “make bellies happy.”

“Greg’s new menu kicks off at Poppyseed Rye effective immediately, it’s already live,” said the press release. “It features breakfast all day, with all new breakfast sandwiches and awesome classics like biscuits and gravy. He’s also added some of his favorite sandwiches and will run daily specials.”

Poppyseed Rye has changed its hours, focusing on lunch and later breakfasts.

“To coincide with the changes, Poppyseed Rye is now open daily from 9 a.m.-4 p.m., and has added a coffee menu to go with the new food,” the press release said. When it opened last November, the hours were 11 a.m.-10 p.m.

Parker and Lloyd have their sights set on other ventures, as well. The team is now “busy concepting upcoming restaurants… to be announced in the coming months, including one project in Fells Point, Baltimore.”

A new Laotian restaurant has moved into Cherrydale. Tuna Restaurant opened in early September at 3813 Langston Blvd, two doors down from historic Cherrydale Hardware. It’s taking over the former…

END_OF_DOCUMENT_TOKEN_TO_BE_REPLACED

More Stories
Condo building near Rosslyn could open this winterBiz Talk: Call for applications for the inaugural Arlington REV Awards!