Former Secretary of State and expected 2016 presidential candidate Hillary Clinton will be in Arlington on Saturday, signing copies of her new memoir.

Hard Choices will go on sale on Tuesday. The book chronicles Clinton’s four years as Secretary of State and the “crises, choices, and challenges she faced.”

Following Hillary to the signing will be a large tour bus paid for by Ready for Hillary, the Arlington-based political action committee that’s supporting Clinton in her expected 2016 presidential run. 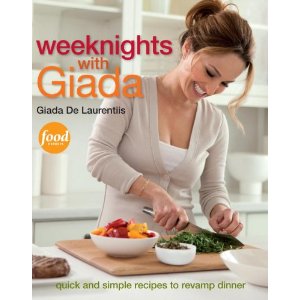 She’ll be at Sur La Table (1101 S. Joyce St) in Pentagon Row on March 31 to promote her upcoming cookbook, “Weeknights with Giada.” The recipes in the book are touted as home cooked dishes that come together quickly, many in half an hour or less.

De Laurentiis will sign copies of the book starting at noon. Fans who want to attend the book signing must purchase a copy of the cookbook from Sur la Table in Pentagon Row. The purchase will grant the customer one ticket to attend the signing event.

The book goes on sale on March 27. 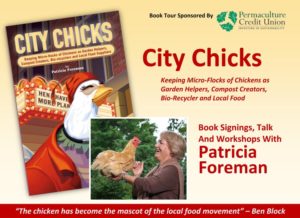 A group that’s trying to convince Arlington County to allow residents to raise backyard hens is bringing in an “urban chicken expert” as a speaker this week.

Pat Foreman, co-host of the “Chicken Whisperer Backyard Poultry and Sustainable Lifestyles Talk Show,” will be addressing members of the Arlington Egg Project (motto: “Give Peeps a Chance“) on Thursday night. Foreman has written books like “City Chicks,” “Chicken Tractor” and “Day Range Poultry,” which promote the benefits of small-scale hen-keeping. She will teach interested Arlingtonians the ins and outs of “keeping micro-flocks of laying hens as garden helpers, compost makers, bio-recyclers and local food suppliers.”

Foreman, who lives near Lexington, Va., will provide chicken supporters additional ammunition in their quest to get Arlington to relax rules that prohibit the vast majority of residents from keeping egg-laying hens in their backyards. Among the poultry-powered benefits she promotes: “enhance backyard agriculture… divert food and yard ‘waste’ out of landfills… decrease oil consumption… lower carbon footprints… improve national defense and emergency preparedness.”

The event, co-sponsored by the Virginia Cooperative Extension, will take place on Thursday, Oct. 20 from 7:00 to 9:00 p.m. at the Fairlington Community Center (3308 S. Stafford Street). The public is asked to pre-register by calling 703-228-6414 or by emailing [email protected]

Following Foreman’s talk, the Arlington Egg Project plans to discuss the “next steps” in its advocacy effort. The group has told members that it’s nearing 1,000 signatures on a petition it plans to present to the Arlington County Board. 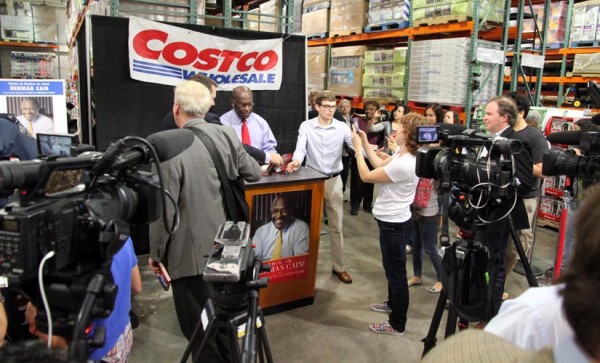 Cain was at the store signing his new memoir, This Is Herman Cain! The front-running candidate warmly greeted supporters, who had waited in a long line to meet Cain and get his signature on their copy — or, in most cases, copies — of his book.

The signing was scheduled to last an hour. Later today, Cain is expected to to attend the Value Voters Summit in D.C. 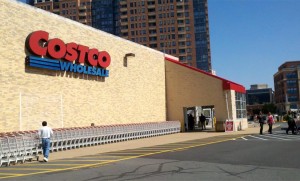 Republican presidential candidate Herman Cain, who’s tied for first among a crowded GOP field in a new CBS News poll, is scheduled to appear at a book signing in Pentagon City later this week.

The former Godfather’s Pizza CEO will sign copies of his new memoir, This Is Herman Cain!, from 12:00 to 1:00 p.m. on Friday at the Pentagon City Costco (1200 S. Fern Street), according to the Costco web site. Following the book signing, Cain is scheduled to attend the Value Voters Summit in D.C.

The Pentagon City Costco is no stranger to book signings by high profile political figures. Condoleezza Rice and Laura Bush both held signings at the store last year. 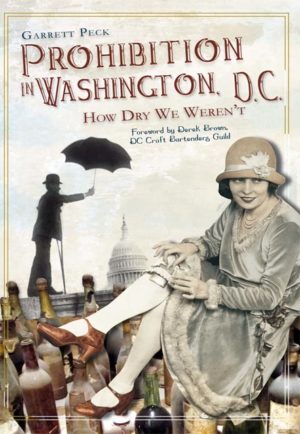 Arlington resident Garrett Peck is a nonfiction author, a self-described “history dork,” and — apparently — quite the booze enthusiast.

Following up on his book The Prohibition Hangover: Alcohol in America, Peck has just released “Prohibition in Washington, D.C.: How Dry We Weren’t.” The book chronicles the history of temperance, vice and law enforcement in the Nation’s Capital from about 1917 t0 1934. The book includes dozens of historic images and even contains 11 vintage cocktail recipes.

Peck will be participating in an author talk and book signing at Arlington Central Library (1015 N. Quincy Street) starting at 7:00 p.m. on Thursday, June 9.  We asked him to tell us a bit about the role Arlington played in the history of prohibition. Turns out we were the place where D.C. dumped some of its contraband beer. 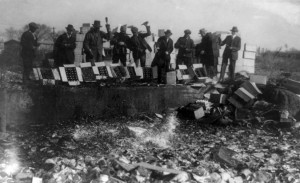 “As you probably know, Arlington wasn’t heavily settled yet during the era of national Prohibition (1920-1933), though it certainly was growing: the neighborhoods along the streetcar line between Clarendon and Georgetown grew up as leafy suburbs during this period.

Virginia actually started Prohibition earlier than national Prohibition: we went dry in 1916. This closed down all the breweries and distilleries in the state – including the Arlington Brewing Company that was just over the Key Bridge from Georgetown, where the Key Bridge Marriott is now in Rosslyn. Rosslyn at the time was a bit of an industrial zone, as an offshoot from the C&O Canal crossed the river to connect to Alexandria, and there was a rail yard, lumber yard, a Noland Plumbing factory, and of course the brewery. (There’s a great aerial photo of Rosslyn from 1930 in James Goode’s book “Capital Losses”; you can clearly see the Arlington Brewing Co. building, which at the time was producing Cherry Smash, a non-alcohol beverage). Another brewery – the Robert Portner Brewing Company in Alexandria, which was one of the largest breweries in the South, was also closed. Congress declared Washington, DC to be dry on November 1, 1917, and the remaining four breweries in DC all stopped their brewing operations. Only one survived Prohibition: the Christian Heurich Brewing Company, which was where the Kennedy Center now is, and operated until 1956.

END_OF_DOCUMENT_TOKEN_TO_BE_REPLACED 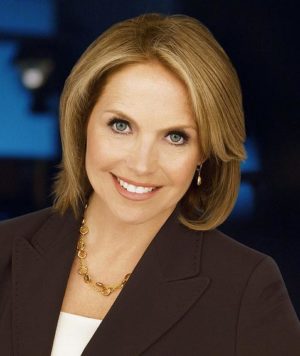 CBS Evening News anchor Katie Couric is coming back to Arlington for a book signing.

Couric, an Arlington native, is a graduate of Jamestown Elementary, Williamsburg Junior High and Yorktown High. On Wednesday, May 18, she will return to Arlington to sign her new book, The Best Advice I Ever Got: Lessons from Extraordinary Lives, at the Pentagon City Costco (1200 S. Fern Street).

The book signing will start at 11:00 a.m., according to Costco’s web site. Couric recently announced that she will be leaving the CBS anchor chair in June, when her contract expires.

Condoleezza Rice has been making the television rounds lately, promoting her new memoir. Last night, she made an appearance on the Daily Show. Today she’s appearing at the Pentagon City Costco.

The former U.S. Secretary of State will sign copies of “Condoleezza Rice: A Memoir of My Extraordinary, Ordinary Family and Me” from noon to 2:00 p.m.

The book is a candid look at Rice’s childhood and adolescence in Birmingham, Ala. during the civil rights movement.

Now that the National League has broken their 13-year All-Star Game slump, and not a single game is to be played today, what’s a baseball fan to do?

Head to the library.

The authors of Baseball Americana, a comprehensive history of the game chock full of illustrations and memorabilia from the archives of the Library of Congress, will be discussing the book and signing autographs tonight at 7:00 at the Central Library auditorium (1015 North Quincy Street).

There will also be baseball-themed prizes given away during the event, which is free and open to the public. 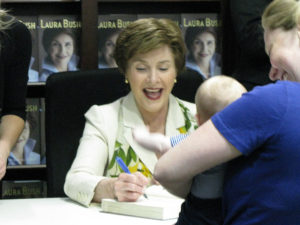 Former Lady Laura Bush signed copies of her new memoir, Spoken from the Heart, at the Pentagon Costco (1200 South Fern Street) this afternoon.

As light country music played, the first lady warmly greeted fans who had waited in a line that snaked down one of the store’s long aisles.

Most of the autograph-seekers were women. Many had young children in tow.

A few well-dressed men were also waiting in line. At least one spoke to Mrs. Bush with the kind of familiarity that made it clear he had worked with her husband in the former administration. 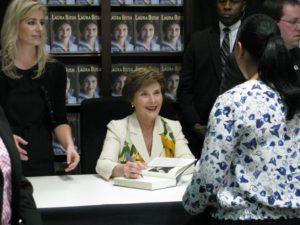 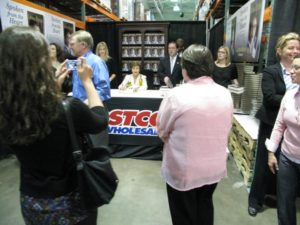