(Updated 3:45 p.m. on 2/22/22) A typo in a recent public hearing notice has had some larger consequences for Arlington County.

The error — an incorrect date printed on posters around town — also sparked a County Board discussion yesterday (Tuesday) about finding more effective ways to communicate with residents about upcoming hearings and projects.

This is a recurring conversation for Board members, who have now critiqued the county engagement processes for being neither penetrative nor inclusive enough.

Currently, the county posts signs at and near near the sites of future land-use projects, per its zoning ordinances. It also prints advertisements in the Washington Times newspaper to meet state public notice laws.

The fliers posted this time around bore the wrong date: Feb. 19, or this Saturday, instead of Feb. 12, when the County Board actually met.

As a result, most of the hearing items impacted — including plans for a church moving to Ballston, a new daycare coming near Clarendon and a private school opening in a church near Crystal City — will be rescheduled for a meeting on Saturday, March 19.

A hearing for the Marbella Apartments, a forthcoming affordable housing project near Rosslyn, will be heard at a special meeting on Monday, Feb. 28 at 6:30 p.m. so that the project can meet an early March deadline to receive tax credits from Virginia Housing.

Those who spoke at the Saturday meeting will have their comments entered and don’t need to return, officials said.

“Unfortunately, [for] this error — which anyone can make an error like that — we didn’t have redundancy, which is something we’re going to address immediately,” County Manager Mark Schwartz said. “We’re going to be immediately improving our process to address this.”

Only one person reviewed the dates before the printed placards went out, he said. The newspaper advertisement, meanwhile, had the correct date, but County Board members mused about whether putting legal notices in the Washington Times, a conservative daily newspaper with a circulation around 50,000 in the D.C. area, is effective.

“This invites the question of not just ‘What went wrong here?’ but ‘What could go better in the future?'” Board Vice Chair Christian Dorsey said. “Many have long decried our practice of advertising in the Washington Times, given its relatively low circulation in the county. While it meets the legal requirements, it doesn’t necessarily meet the spirit of broad notice.”

She said she “would love” to advertise with an online news source, but state law mandates that such notices be placed in print publications.

“We have at least one of those where a lot of Arlingtonians get their news,” Cristol said. “We are constrained by state code from doing that — and some very effective lobbying from what I understand is the Virginia print industry, which is very interested in keeping that requirement the same.”

Virginia Press Association Executive Director Betsy Edwards says the current system “works very well for the majority of the citizens of the Commonwealth.”

END_OF_DOCUMENT_TOKEN_TO_BE_REPLACED

About 4,000 Arlington households received a flyer in their water bill this month advertising a county E-CARE recycling event.

The only problem is, the flyer advertised the E-CARE event that happened this past October. A spokeswoman for the Arlington County Department of Environmental Services says the mix-up happened due to a printing error made by a county vendor. The flyer was supposed to advertise the spring E-CARE event that’s happening on April 20.

“The correct flyers are now being printed and will be sent out at no cost to the County,” spokeswoman Shannon Whalen McDaniel told ARLnow.com. “The flyers will be accompanied by a note explaining the error.”

E-CARE allows residents to safely dispose of electronics and hazardous household items. The next event will be held from 8:30 a.m. to 3:00 p.m. on Saturday, April 20, at Thomas Jefferson Middle School (125 S. Old Glebe Rd). 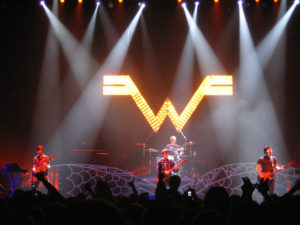 It turns out we were wrong to assume that a Weezer concert that was said to be taking place “near The Fashion Centre at Pentagon City Microsoft Store” next weekend, in honor of the store’s grand opening, will be taking place at the mall. Or in Virginia, for that matter.

Weezer fans can get tickets to the event by visiting the Microsoft Store’s Pentagon City mall grand opening on Thursday, Aug. 9. Starting at 10:00 a.m., the store will distribute free wristbands for admission to the event, in pairs of two, according to the Microsoft Store website. The first 200 people in line will also reportedly get a wristband for a meet and greet with the band.

A few lucky people who get in line early on the 9th will also have the chance to play Microsoft Kinect with Washington Wizards star John Wall later that day.

ARLnow.com apologies for the error in our previous article.

Photo by “James” via Wikipedia