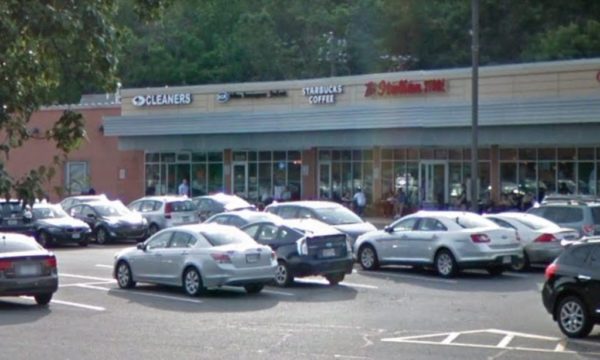 A Starbucks customer foiled a would-be armed robber — twice — over the weekend.

According to an Arlington County Police crime report, a man walked into a business on the 3100 block of Lee Highway just after 5 a.m. Sunday morning, brandished a firearm and ordered everyone to the back of the store. A customer with a venti-sized dose of audacity then intervened.

“A patron physically challenged the suspect causing the suspect to exit the business,” said the crime report. “The suspect immediately re-entered the business brandishing the firearm. Once confronted again by the patron, the suspect fled the scene on foot.”

“Arriving officers canvased the area and a K9 track yielded negative results,” the crime report continued. “No injuries were reported. The suspect is described as a black male, 20-30 years old, approximately 6’0, wearing a black winter jacket with a fur hood. The investigation is ongoing.”

Though police did not specify a business, a tipster said the robbery took place at the Starbucks in the Lyon Village Shopping Center, along Spout Run Parkway.

Asked about a possible surveillance image of the suspect, ACPD spokeswoman Ashley Savage said the department has “nothing for release at this time.”

A new Starbucks has opened its doors in Ballston.

The chain’s latest cafe in Arlington is located at 1000 N. Glebe Road, in the new Marymount University complex, built on the site of the former Blue Goose.

The new development should supply plenty of potential Starbucks customers. It consists of a nine-story office building and a 12-story, 267-apartment residential building that will house students and other renters. 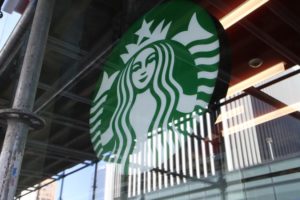 A Starbucks patron had a grande problem inside the coffee shop’s bathroom Wednesday evening.

Police were called to the Starbucks at 901 N. Stuart Street, in Ballston, around 5 p.m., for a report of a man who had somehow gotten himself locked inside the bathroom, unable to get out.

He called police who responded to help unlock and open the door. 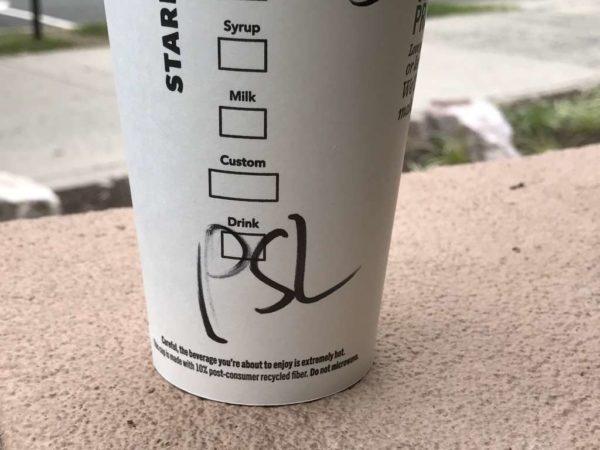 On a cool, gray day when the calendar flipped to September, there was another sign of the start of fall in Arlington: the arrival of the ever-popular Pumpkin Spice Latte at at least some local Starbucks stores.

The sugary, caffeinated beverage is as much a harbinger of fall as crunching twigs and acorns, plaid flannel shirts and brown boots. This year its potential Sept. 1 availability was cryptically teased by Starbucks on its social media accounts, though an official release date has yet to be announced.

This morning at the Clarendon Starbucks store (2690 Clarendon Blvd), there were plenty of Starbucks customers who knew to ask for the “PSL” by name, despite a lack of signs or updated menus announcing its availability. And for those who asked for it, they received it.

After successfully ordering a grande Pumpkin Spice Latte (and paying $5.57 with tax for the privilege), an ARLnow.com reporter asked the barista how many PSLs had been served so far that morning.

0 Comments
Around Town
Starbucks at 1000 N. Glebe Road is close to opening
The coffee giant is on the first floor of Marymount’s “Newside” building
Marymount has started moving into the building ahead of the new school year
Previous Image 1/3 Next Image

(Updated 4:35 p.m.) The first retail tenant at Marymount University’s “Newside” building is getting closer to opening.

Signs are up for the new Starbucks at the property at 1000 N. Glebe Road in Ballston, but the build-out inside still ongoing. Marymount faculty and staff started moving into the new building earlier this month ahead of the new school year.

The coffee giant is the first to commit to moving into the new building’s 5,000 square feet of retail space. The structure replaces the “Blue Goose” that was demolished in 2015.

Marymount is using six floors of the nine-story office building on the site, with the other three floors available for other companies. Next door is a 12-story, 267-apartment residential building.

No word on an exact opening date yet.

0 Comments
Around Town
Marymount’s “Newside” building
Starbucks is applying to be the first retail tenant in the space
Marymount University will control one building
The other building will have 267 apartments
The buildings at 1000 N. Glebe Road replace the “Blue Goose”
Previous Image 1/5 Next Image

Construction is almost complete at Marymount University’s “Newside” building, and it has landed its first retail tenant.

Permit applications filed with the county indicate that Starbucks will move into the property at 1000 N. Glebe Road in Ballston.

The coffee giant would be the first to commit to moving into the new building’s 5,000 square feet of retail space. The structure replaces the “Blue Goose” that was demolished in 2015.

Two buildings are under construction on the site: a nine-story office building and a 12-story, 267-unit residential building.

The former will be owned by Marymount University, with the university using six floors as office and educational space. The top three floors will be leased out as office space.

Between the two buildings, there will also be a 10,600-square-foot public plaza and pedestrian passageway.

Construction is expected to be completed this summer. 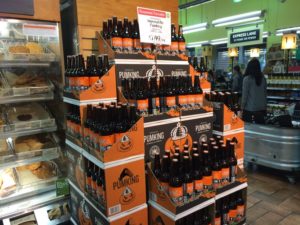 There were enough people jaywalking between the Starbucks and the Whole Foods in Clarendon that it apparently prompted Arlington County to install a sign.

The sign appeared mid-block on the Whole Foods side of Clarendon Blvd. It instructs pedestrians not to cross and to use one of the marked crosswalks up the block.

The block is often congested with traffic turning into the Whole Foods parking lot, making it even more dangerous for pedestrians trying to cross the street outside of a crosswalk.

Update at 1:05 p.m. — As readers are pointing out, the sign has, in fact, been there since at least 2014, as proven by Google Street View. It is not “new” except, perhaps, on a geological timeframe. The 2012 Street View image does not show the sign. The 2007 and 2009 Street View images both show people standing where the sign currently is, apparently waiting to cross the street.

A brand new Starbucks store is open on the corner of 12th Street and S. Fern Street in Pentagon City.

The cafe opened last week and has already attracted a sizable flock of MacBook-bound latte sippers.

The coffee shop is one of the first businesses to open along the new 12th Street extension between Fern and S. Eads Street. A Whole Foods is also opening soon on the block, and a competing cafe — Commonwealth Joe — is working to open its “flagship” location on the block, on the ground floor of the new Bartlett apartment building, this summer.

The incident happened around 8 a.m. on Friday, Arlington County Police said today, after a Starbucks employee found a threatening note on the floor.

“Business was being conducted as usual when officers arrived,” ACPD spokeswoman Ashley Savage said. “K9s swept the store periodically throughout the day with negative results. There is no suspect description.”

The Starbucks was reported to be on the 1100 block of S. Joyce Street, at the Pentagon Row shopping center. Friday (April 1) was April Fool’s Day.