(Updated at 4:30 p.m.) There’s still a lot that needs to be done in The Heights, the new home of H-B Woodlawn Secondary Program and the Shriver Program, before the school opens next week.

Construction crews are putting on the finishing touches of the building at 1601 Wilson Blvd even as teachers get their classrooms ready for the start of school next Tuesday (Sept. 3). Much of the state-of-the-art interior is completed.

Demolition for the old Wilson School at the site started in 2017, with crews working since then to build the new, five-story terraced structure. Most of the building is slated to be open and usable when school starts, though the auditorium remains under construction. Jeffrey Chambers, director of design and construction for Arlington Public Schools, explained that there’s still construction work that needs to be done and it won’t be accessible until a few weeks after the school opens.

There are other projects around the school, smaller pieces Chambers described as “finishing up the punch list,” but Chambers said any construction work that would be disruptive to students will be done after hours.

“We’re excited to open in a week,” said Dr. Casey Robinson, principal of H-B Woodlawn. “There’s lots to do and we’re having lots of fun exploring the new space.”

H-B Woodlawn is a secondary program with a focus on students playing an integral role in developing school curriculum and shaping the culture of the school. Robinson was a student at the old H-B Woodlawn and later became a teacher there, so like much of the faculty she’s still adjusting to the new location, but she and the others are approaching it with a smile.

“We’ve been telling ourselves and our students that the comfortable feeling [at the old school] took 40 years to create,” Robinson said. “It won’t happen overnight.”

But artifacts brought over from the old school have helped soften the blow of the move for Robinson, as has an elaborate mural painted across the main common area that includes images from the generations that decorated the walls of the old school. Robinson said a “town meeting” planned with faculty and students will decide how the relics should be displayed.

The lower two floors of the building will be devoted to the Eunice Kennedy Shriver Program — formerly the Stratford Program. The two programs will share a common area, cafeteria, auditorium and other school amenities.

“I can’t begin to tell you how excited I am [for school to start again],” said Dr. Karen Gerry, principal of the Shriver Program. “It’s surreal to be in this beautiful building and we’re excited to collaborate again with H-B Woodlawn.”

Plans for the new building haven’t always been happily received by the H-B Woodlawn community, but faculty at the school seemed determined to make the best of the new, more urban location.

“All of your familiar teachers are ready to welcome you back,” Robinson said.

Bill Podolski, director of choral activities at H-B Woodlawn, wore a shirt with an artistic rendering of the school’s former beloved home — which has been transformed into a neighborhood middle school — but seemed happy in a spacious band room with a full wall of multi-floor windows.

The secondary school program is for students with special needs. A seven-member renaming committee of teachers, parents, and students decided to rename the program after Eunice Shriver Kennedy, founder of the Special Olympics and long-time activist for people with intellectual and physical disabilities.

“We decided that her name didn’t need any extra words around it,” said parent Lee Whitem, who sat on the renaming committee. She said at a School Board meeting earlier this month that the program would likely be called “the Shriver Program” for short.

School Board Chair Reid Goldstein said he was “delighted” to see the change.

Stratford is a reference to Confederate General Robert E. Lee’s home plantation and has been criticized as a relic of slavery. The School Board previously stripped the name from Stratford Junior High School, renaming it after civil rights activist Dorothy Hamm, who integrated the school and left a lasting impression on the community.

The Stratford Program will be renamed officially starting July 1, according to outgoing Superintendent Patrick Murphy, who announced the change during the June 6 School Board meeting.

In the fall, the special needs program is set to move into the new Heights building in Rosslyn together with H-B Woodlawn.

“We’re going to the Heights building changing our name to the Eunice Kennedy Shriver Program, which is very appropriate and very wonderful,” said Stratford Program Principal Dr. Karen Gerry. “Our students will flourish in this community and under this new name.”

Stratford’s new school on Wilson Blvd. We move in fall of 2019. pic.twitter.com/WrMVHHv0Rn

In the past, School Board members stripped the “Lee” from Washington-Lee High School over heated opposition from some wanting to keep the reference to the Confederate general.

Last month, the state also agreed to let Arlington rename Jefferson Davis Highway as Richmond Highway to ditch the reference to the president of the Confederacy, and the Nauck Neighborhood renamed itself Green Valley Neighborhood, ditching a reference to a Confederate soldier.

Construction is proceeding as planned on The Heights Building, the name of the H-B Woodlawn Secondary Program’s new home at the former Wilson School site in Rosslyn.

Located at 1601 Wilson Blvd, The Heights Building will include an estimated 775 seats for students, at a cost of around $100 million. The Leo A. Daly– and BIG-designed building, with its unique stacked-rectangle design, will house both H-B Woodlawn and the Stratford Program.

H-B Woodlawn, an arts-oriented high school program with a focus on self-discipline, was once known as “hippie high.” Stratford is a secondary school for students with special needs.

Demolition for the project started in 2017.

Arlington Public Schools spokesman Frank Bellavia told ARLnow that the project remains “on schedule to open in September,” though he offered no other details on the construction progress so far.

Meanwhile, next to The Heights Building, another large construction project is underway. Excavation for the massive project — which will feature three towers, a park and a new road as part of a mixed-use development called The Highlands — appears to be mostly complete.

More from our prior coverage in October:

Work is kicking off on a massive new development in West Rosslyn, and its developer is offering a first look at its plans to build three new residential towers, a new fire station and an improved Rosslyn Highlands Park.

The D.C. developer Penzance announced today (Monday) that it would be dubbing the project “The Highlands,” which will be located at 1555 Wilson Blvd.

In all, the development will include 104 condos, 780 apartments and 40,000 square feet of retail space, including a new CVS pharmacy replacing the old shop at the location that closed earlier this year. 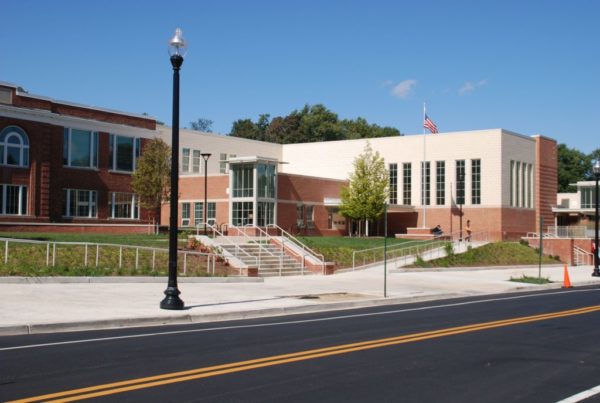 With Arlington Public Schools’ Stratford Program getting ready for a big move, school leaders are giving students (and their parents) a choice about where they’ll spend the next year learning.

The program, which serves secondary-level special education students, is set to relocate into a new building in Rosslyn for the 2019-2020 school year. But its current space on Vacation Lane, which it shares with the H-B Woodlawn Secondary Program, will soon be renovated to become a new middle school, forcing Stratford students to temporarily find a new home.

APS officials initially planned to send Stratford over to the Reed School building in Westover for a year, but a few weeks ago they began seeking feedback from parents on a plan to move the program to Yorktown High School instead.

In a letter to Stratford parents Monday (June 4), Stratford principal Karen Gerry revealed that APS settled on a compromise solution between those two proposals. Families will now have the option of sending students to Yorktown or Reed for the 2018-19 school year; summer sessions in both 2018 and 2019 will be held at Reed, regardless of which option families choose, however.

“While we understand that this may mean some students within the Stratford program are educated in different locations for the 2018-19 school year, we also know that the needs of our students are different,” Gerry wrote. “We will provide the staffing and supports expected in the program at either location and will work with families on specific needs.”

Families have until June 15 to complete a survey on where they’d prefer to send their students.

Gerry added that “we want to reassure you that the Stratford Program will continue and our plan to move to the new building on Wilson in the fall of 2019 is moving ahead.” Some rumors circulated a few weeks back that APS would seek to eliminate the Stratford program instead, but officials have insisted there are no such plans in the works.

The full letter from Gerry to Stratford parents is after the jump.

END_OF_DOCUMENT_TOKEN_TO_BE_REPLACED 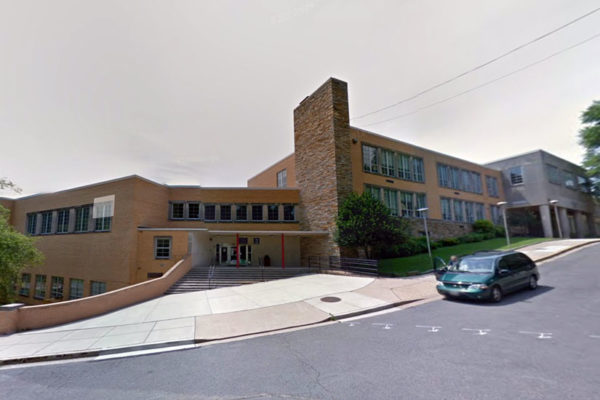 Arlington Public Schools is shooting down rumors that the Stratford Program is going to be “dismantled” while also announcing that a new, temporary location is under consideration.

Stratford serves secondary-level special education students and is currently co-located with the H-B Woodlawn Secondary Program on Vacation Lane. Both programs are set to move to a new facility in Rosslyn for the 2019-2020 school year, but Stratford will be moving to a temporary home during the next school year to facilitate the renovation of its current building into a neighborhood middle school.

In a letter to parents today, Stratford principal Karen Gerry said that APS is now reconsidering a plan to house Stratford in the Reed School building in Westover for a year. For various reasons, APS says Yorktown High School may be a better temporary location, and the school system is kicking off a hurried outreach effort with parents to discuss the new option.

Gerry, in her letter, also acknowledges a false rumor that had been spreading via email that APS was planning to eliminate the Stratford Program.

“It seems that Arlington County has made a decision to dismantle the Stratford Program and that we will not be joining HB Woodlawn at the new site in Rosslyn, as planned,” said the email, which was sent by a parent and later obtained by ARLnow.com. “Several Stratford parents are concerned that this decision has been made without consultation with the wider Stratford community.”

“Over the last few days, there have been many community conversations, emails and statements posted about our plans for next year, and unfortunately, much of it has included misleading or incorrect information,” Gerry wrote. “We want to reassure you that regardless of the one-year location for Stratford students in the 2018-19 school year, the Stratford Program is not being dismantled and our plan to move to the new building on Wilson in the fall of 2019 has not changed.”

The full letter from Gerry to Stratford parents is after the jump.