On Sunday, Josephine’s Italian Kitchen (2501 9th Road S.) closed its doors for good and marked the end of an era for a Columbia Pike restauranteur.

Both Twisted Vines and BrickHaus closed last year, which at the time Wagner said was part of a plan to regroup and focus on the new Josephine’s Italian Kitchen. All of the restaurants were located within a few blocks of each other on Columbia Pike, where Wagner lives.

Wagner said the decision to close was brought about by family issues and he hopes that the closure will allow him more time to focus on other priorities.

Following the closure, Wagner said he’s still on the lookout for new opportunities in the area, but for now, there’s nothing planned.

Wagner is still deciding what to do with the neon “Gelato” sign in Josephine’s, which he called the “most Instagrammed” thing in the restaurant.

“It might find a place in our home,” Wagner said.

For the last few years, pie chef Sol Schott has relied on the kitchen space at Columbia Pike’s Twisted Vines Bar and Bottleshop to whip up his wares — now, his Acme Pie Company is taking over the storefront.

Schott told ARLnow that he signed a five-year lease this week for the space at 2803 Columbia Pike. It’ll be the first brick-and-mortar location for his baking business, after he spent years selling his pies wholesale and offering them up at local farmers markets.

“It’s really terrifying, but weird and exciting,” Schott said. “This just sort of fell into my lap.”

Schott said he’d been toying with the idea of opening a physical location for a while now, but he felt compelled to act as he faced a stark choice at the start of the new year: “I had to either move the kitchen or take over the lease.”

That’s because Twisted Vines owner Tony Wagner decided to shutter the wine bar at the end of last year, along with the nearby BrickHaus beer garden, to focus on his new Italian restaurant in Penrose Square. Schott had relied on Wagner’s oven for his pie-baking ever since he launched Acme back in 2013, and he suddenly found himself without a home when Wagner closed up shop.

Though he examined other potential locations, Schott said he ultimately decided to try and stay put in the Pike space (he lives in nearby Douglas Park, after all) and he was eventually able to strike a deal with its landlord.

Schott is now envisioning a “1920s or 1930s pie bar” for the store, befitting his business’s throwback name. He’s also planning a bit of an old-school schedule as well — Schott hopes to keep his wholesale business going, so he’ll be hard at work baking pies from about 5-10 a.m. each day.

If anyone stops by the store while he’s slaving away at the oven, he’ll run upstairs and sell them a freshly baked pie.

“I’ll have a baby monitor or something out front so they can talk to me,” Schott said. “People used to do that back in the day, they’d ring a bell or something… It’s unconventional, but it makes no sense for me to just be open from 6 a.m. to 7 p.m. every day.”

When the store is open (likely starting around 2 p.m. each day), Schott hopes to still serve whole pies and pies by the slice, with many of the same flavors he currently bakes up. Options include everything from sour cherry to Scottish apple.

With the new store, he also plans to offer some “fancy sodas” and other sweet treats as well.

“If you’ve got pie, you should probably have ice cream,” Schott said. “And if you have that, it’s pretty easy to make milkshakes.”

He expects to offer limited coffee options, buying his beans from Misha’s Coffeehouse in Old Town Alexandria. But he doesn’t think he’ll get more complex than just drip coffee or a french press.

“As long you don’t come in there and think you’re going to get a vanilla macchiato or whatever, you’ll be OK,” Schott said. “I don’t know anything about it, I can’t compete with those other coffee places.”

So long as all goes well, he plans to open the shop for hungry customers by April 1. Schott says he has some painting to do “to make the place not feel like a wine bar anymore,” but otherwise already has many of the permits he needs from the county.

And considering that Schott says he’s already heard from a bevy of friends and customers excited about his new venture, he expects it should draw a crowd right away.

“I want it to be a fun place, a place for the community,” Schott said. “But my idea is kind of off the wall.”

A pair of bars along Columbia Pike will soon shut down, as restaurateur Tony Wagner consolidates his South Arlington eateries into one location.

Both the Twisted Vines Bar and Bottleshop and BrickHaus beer garden will shut down after hosting New Year’s events on Dec. 31, Wagner told ARLnow.

Wagner owns both businesses (which sit just steps away from each other at 2803 Columbia Pike and 2900 Columbia Pike, respectively), and the closures will leave him with just the newly opened Josephine’s Italian Kitchen in the Penrose Square shopping center still operating in the area.

Twisted Vines first opened under different ownership in 2010, and Wagner took over the eatery in 2015. Then, he set to work on opening the beer garden, a first for the Pike, and was able to get it up and running just last year.

Wagner says he made the “difficult” decision to shutter BrickHaus after concluding that it “never took off the way we expected and hoped it would,” a development made all the more painful by the months of permitting and construction woes he endured to open the bar.

He said Twisted Vines remains quite popular on the Pike, however, but he started to feel its current space didn’t have enough room for it to grow. And with its lease up at year’s end, and a new restaurant just down the road, he saw an ideal opportunity to regroup.

“We have a great new venue in Josephine’s and figured it was a great opportunity to take Twisted down there until we can find it a new home,” Wagner said. “Twisted has been part of the Pike community for a long time and it should be back.”

Wagner dubbed his new Italian eatery, which first opened in late October, as a “home away from home” for Twisted Vines during the transition. He plans to move much of the wine shop’s offerings to the restaurant, and will keep hosting the bar’s wine club and regular wine dinners at Josephine’s.

“Josephine’s is Twisted with value added, basically,” Wagner said. “It’s a better space, with a lot more room for us.”

He’s hoping to find a new location for Twisted Vines sometime in the coming months. But, in the meantime, all the shop’s whiskey will be half off over the next few days, then all wine be marked down by 50 percent this weekend. The location will also play host to one final dinner on New Year’s Eve to celebrate the restaurant.

Wagner will also hold a “New Year’s Eve blowout” at BrickHaus, with 50 percent off all checks. He said he wouldn’t necessarily be opposed to bringing back a similar beer garden to the Pike going forward, but given the challenges he faced at BrickHaus, he’s not optimistic about the prospect.

“We’re always interested in new opportunities,” Wagner said. “We listen to people and find out what people want and give it a try. If that doesn’t work, then we keep trying. The ultimate goal is to find a concept that resonates with the community.”

Twisted Vines Bar and Bottleshop at 2803 Columbia Pike has a new owner and with it, a new menu and more drink options.

“Our whole concept that we’re working for is casual elegance,” said Tony Wagner, who took over on Aug. 10.

Wagner wants the place to be welcoming, with good quality food at “neighborhood prices,” he said. With his new concept of “casual elegance” in mind, Wagner and his staff have added new small plates, dishes and craft beers to the restaurant’s menu.

In addition to the small plates, which include new crab cakes, Wagner’s kitchen staff has also added flatbreads.

“We overhauled the menu completely,” Wagner said. “[We added] small plates that are absolutely delicious and pair well with the drinks.”

Wine, and to a lesser extent beer, have been the main attractions of Twisted Vines since it was opened in 2010 by previous owners Sybil and Josh Robinson. Wagner is expanding the drink menu by adding whiskey and bourbon drinks, as well as a new Bloody Mary for brunch, he said.

Under Wagner’s leadership, the restaurant has also started opening on Mondays, from 4-10 p.m., according to the restaurant’s Facebook page.

Twisted Vines is the first restaurant Wagner has owned, he said. The restaurant’s foundation had already been established by the Robinsons, giving him a good base to build on, he said.

Owning a restaurant has been “a passion for a while and the opportunity presented itself,” Wagner said.

With a freshly-obtained ABC permit on hand, Twisted Vines will finally begin serving up their 100+ bottle wine selection Tuesday evening. The hotly-anticipated Columbia Pike wine bar had hoped to open its doors over the weekend, but a delay in getting the alcoholic beverage permit put the kibosh on those plans.

Twisted Vines will open from 4:00 to 11:00 p.m. Tuesday and Wednesday. This “soft opening” proceeds the formal grand opening, still planned for Saturday, March 6. 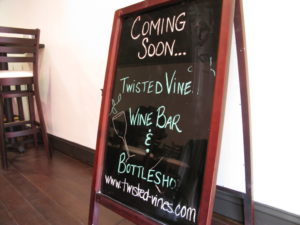