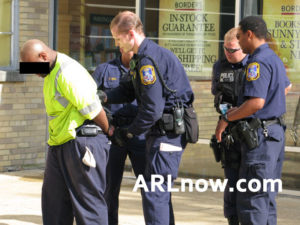 An employee with Metro’s Track and Structures/Systems Maintenance Department was arrested by Metro Transit Police at the Pentagon City Metro station Thursday night, a Metro spokesperson confirmed to ARLnow.com this morning.

“MTPD officers on patrol at the station observed a man who appeared to be unsteady on his feet around 5:15 p.m,” Metro spokesperson Ron Holzer said in an statement. “The man began to run as the officers approached. He then struggled with the officers when they apprehended him… He was charged with being drunk in public and impeding an officer with force (assault).”

The employee was off-duty at the time of his arrest, according to Holzer. He was in his uniform but “his shift had ended many hours before his arrest.”

The man was pepper sprayed during the struggle with police. At that point Arlington paramedics were called to evaluate him. After he was evaluated, officers could be seen pulling an empty glass bottle from the employee’s back pocket.

The man, who has not been identified, has been working for Metro since December 2006, Holzer said.

He could be overheard yelling as police officers surrounded him on a public sidewalk near the Pentagon Centre shopping center.

“I’ve been arrested so many times it’s hilarious,” he said at one point. 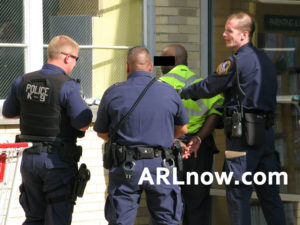 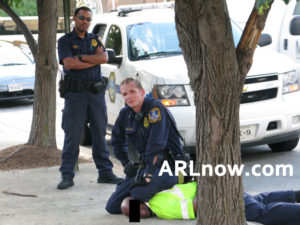