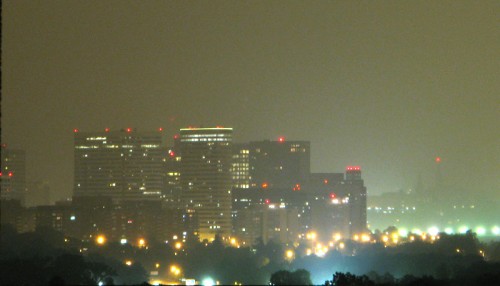 Arlington Joins Region-Wide HOV Enforcement Effort Today — Today Arlington police will be joining Virginia State Police and other local law enforcement agencies in an effort to crack down on HOV violators. During the morning and evening rush hours, police will step up HOV patrols on I-66, I-395 and other local highways. More from WaPo’s Dr. Gridlock.

Injured Vets Stop at Iwo Jima Memorial on Cross-County Bike Ride — A group of 18 bicyclists, many of them wounded veterans of the wars in Iraq and Afghanistan, stopped in Arlington last night on their way from San Francisco to Virginia Beach. The vets stopped at the Marine Corps Memorial to see the retiring of the colors ceremony. More from the Associated Press.

Moran’s Cash Advantage Over Murray Nearly 20:1 — Talk about an incumbent advantage. In the latest disclosure period, Rep. Jim Moran (D-Va.) reported nearly twenty times as much cash on hand as his Republican challenger, Patrick Murray. Murray has $29,890 to Moran’s $581,829. The Sun Gazette reports that Murray’s congressional campaign also has $35,000 in unpaid debt.

Annual Twilight 5K Returns to Crystal City Saturday — Now in its third year, the Crystal City Twilighter 5K will once again wind its way through the streets of Crystal City as the sun sets Saturday night. The race will get underway around 8:00 p.m. on Crystal Drive between 20th Street and 23rd Street. The Twilighter features medals for the top three finishers in 16 age groups, cash prizes for the top five finishers, and a killer after party. Online registration for the race ends Friday.

END_OF_DOCUMENT_TOKEN_TO_BE_REPLACED

More Stories
Would-Be Restaurant Will Be Torn Down, Turned Into a ParkIn a Moment, A Life Taken and Many More Shaken