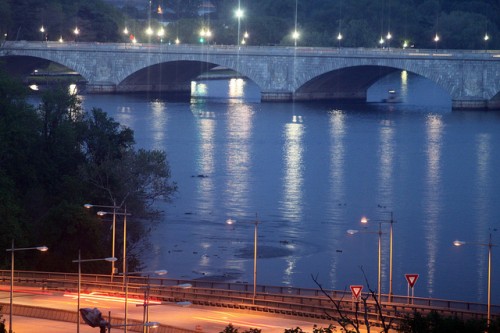 Hot Tub Catches Fire in Cherrydale — The fire department responded to a residence near North Quebec and 22nd Streets for a hot tub that somehow caught on fire, we’re told. Firefighters quickly extinguished the blaze, then made sure the fire had not spread to the house. No word on whether the fire was caused by a malfunctioning time machine that sent its occupants back to the 1980s. Thanks to J.A. for the tip.

Clarendon Grill Nostalgia — With Clarendon Grill now closed for renovations, writer Melissa Stagnaro has penned a nostalgic account of working at “CGrill” in the late 90s. We’re not sure what it’s going on the web site of a small New York state newspaper, but it’s a great read nonetheless. One fun tidbit: the guy who interviewed her for the job was Nick Freshman, now co-owner of Clarendon hotspot Spider Kelly’s. At the time, Stagnaro writes, Freshman was “CGrill’s most junior manager… [he] had only recently been elevated from server status himself.”

Democrats Still Peeved About Change-of-Government Effort — Even after it failed to get on the ballot, the change-of-government initiative is still generating some raw feelings among Arlington Democrats. At the Arlington County Democratic Committee’s monthly meeting last night, former chairman Peter Rousselot called the effort a “criminal conspiracy,” the Sun Gazette reports. Rousselot said the Coalition for Arlington Good Government, formed to oppose the petition, will stick around just in case another change-of-government group comes along.