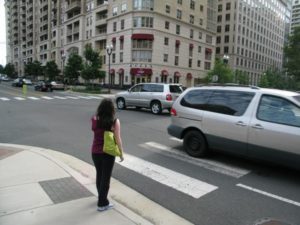 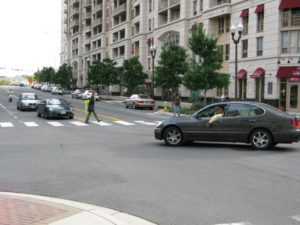 To be sure, the intersection at North Quincy Street and 9th Street in Ballston is challenging, for both cars and pedestrians. But is it dangerous?

The intersection is a two-way stop, with stop signs on 9th Street but clear sailing on Quincy. Those on foot crossing Quincy must trust that fast-moving cars are going to obey the law and yield to them in the crosswalk. Those behind the wheel on 9th Street during rush hour must play a real-life game of Frogger, dodging pedestrians and cars in their effort to make a left or cross the street.

“I wrote to Arlington County [a]while ago about this intersection and they mentioned that it did not need a traffic light or four-way stop,” one concerned citizen tells us. “However, it is still extremely dangerous and should have something to make it safer.”

In an email viewed by ARLnow.com, a county traffic engineer insists that “an all-way stop condition is not recommended at this location.” The engineer said a “yield to pedestrians” sign had been installed to “raise awareness of pedestrian activity at the intersection.”

“I guess someone has to get hit for them to do something,” our concerned citizen said.