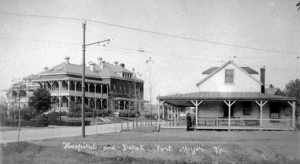 Before there was such a thing as Crystal City — when South Eads Street was a recently-filled canal known as Jefferson Avenue — a state-of-the-art transportation option helped spur the development of what is now the Aurora Hills neighborhood.

That transportation option was the electric trolley. More than 100 years later, Arlington’s leaders are moving forward with a $200 million streetcar project that will stop in some of the same places as its long-forgotten predecessor.

From 1843 to 1896, present-day Eads Street was actually a canal that connected with the famous C&O Canal by means of an elaborate aqueduct bridge over the Potomac. Then in 1896, the canal was deemed obsolete. It was filled in and an electric trolley line took its place.

In 1896, an electric trolley line was constructed along the former canal towpath. The new Arlington trolley line allowed the Mount Vernon Railway to offer continuous service between Washington DC, near Federal Triangle, all the way to Mount Vernon.

The new rail line was instrumental in enabling the development of our Aurora Hills neighborhood in 1910, as the trolley offered quick access for commuters headed into Washington DC. Our neighborhood had four stops along what was then called Jefferson Avenue: Four Mile Run, the Car Barn, 22nd Street, and 18th Street.

By the 1920s, bus transportation had become preferable to the trolley line and the last trolley rolled down Jefferson Avenue in early 1932. In 1934, Arlington County changed the street name to Eads Street (there were too many Jefferson Streets in Arlington County).

Ironically, the county’s proposed streetcar line, which will run along Columbia Pike and Crystal Drive, is intended to be a quicker, cleaner and more rider-friendly alternative to the bus routes that seemed preferable in the 1930s.

There were other streetcar lines in Arlington around the beginning of the century, as detailed in this Wikipedia article. The Fort Myer line, pictured, ran from Rosslyn, through Penrose (a community whose logo is a trolley) to present-day Nauck (Green Valley).

If this all sounds like history repeating itself, there’s one thing that seems especially unlikely to happen that time around. Unlike in 1906, the new streetcar project will probably not result in the development of an elaborate, transit-oriented amusement park in South Arlington.

Photos via Wikipedia and on-the-pike.com
(from the book “Old Dominion Trolley Too: A History of the Mount Vernon Line” by John E. Merriken)