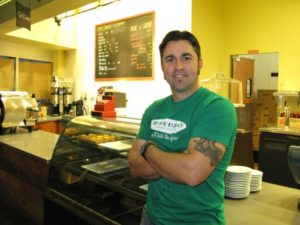 Update at 6:40 p.m. — Bayou Bakery is experiencing a delay in getting its Certificate of Occupancy, according to spokesperson Simone Rathle. That may force the hoped-for Thursday opening to be pushed back.

If the food and coffee at David Guas’ new Bayou Bakery taste half as good as the place looks, the bakery may very well be on track to being Courthouse’s favorite hang out.

The elaborately-decorated, Louisiana-themed cafe is expected to open at some point on Thursday, according to Guas. An exact opening time hasn’t been chosen, but the doors could be unlocked as early as 7:00 a.m.

Guas isn’t thrilled with comparisons to Northside Social — the Clarendon cafe was originally supposed to be Bayou Bakery before a disagreement between Guas and his business partners prompted them to open as Northside instead — but Bayou Bakery has the same general business plan: coffee, beer, wine and food in a comfortable, social environment. 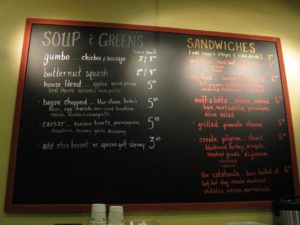 What sets Bayou Bakery apart is the focus on the Louisiana theme. Guas, who was born and raised in New Orleans, has filled the space with music, art and knick-knacks that give Bayou Bakery an unmistakable and authentic sense of place. And if the aesthetics don’t let you escape the neighborhood’s urban, workaday surroundings for just a moment, the menu is sure to do the job.

Beignets, gumbo, Andouille sausage, chilled Gulf shrimp, spiced pecans — and even a salty caramel popcorn mixed with pieces of bacon — all promise to satisfy discerning Cajun palates. Localists will be heartened to know that despite the cafe’s Louisiana theme, many of the ingredients will be locally-sourced.

The food menu is more extensive than Northside, but the coffee program is much the same. Guas said it was his intention to serve Counter Culture coffee from the beginning, and he’s not letting Northside’s devotion to Counter Culture change his admiration for the company and its product. One unique twist will be Bayou Bakery’s French-pressed chicory coffee, which is blended in-house using a custom Counter Culture roast and imported chicory. 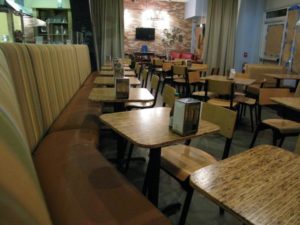 Bayou Bakery will initially feature one draft beer — Abita Amber, naturally — and six bottled beers, including four other varieties of Abita. There will be eight wines by the glass, including an ice wine.

Bayou Bakery is expected to get its certificate of occupancy today, the last regulatory step before opening. Guas says the cafe, which includes a comfy lounge with a flat-screen TV, should seat about 60. This spring, the bakery plans to open a sidewalk cafe with seating for another 30.

Bayou Bakery is located at 1515 North Courthouse Road, in the old Camille’s Sidewalk Cafe space. Former Camille’s customers may notice that the floor, chairs and general layout are the same. When Camille’s closed, the owners abandoned the lease and left everything inside for the landlord, which offered it to whomever wanted to take over the lease. Guas says he did his best to reuse Camille’s items, where possible.

Free WiFi will be available at the store, but Guas didn’t install electrical outlets for customers’ laptops. Bayou Bakery is not intended to be an internet cafe, he said.