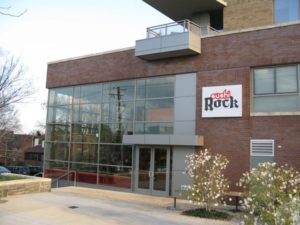 Sushi Rock, Arlington’s leather-clad, rock ‘n’ roll take on Japanese cuisine, got the live entertainment permit it wanted from the county board last night, but it came with a restriction the business fought to avoid.

Sushi Rock volunteered for most of the provisions sought by residents of the high-end condos above the restaurant: keeping doors and windows closed during live entertainment, using sound-dampening materials, testing decibel levels in condos, designating a “neigborhood liason,” prohibiting loitering outside the business, picking up trash outside, and so forth.

Sushi Rock partner Tony Hudgins was incredulous. He said the live entertainment permit would have no bearing on what’s broadcast through the speakers. 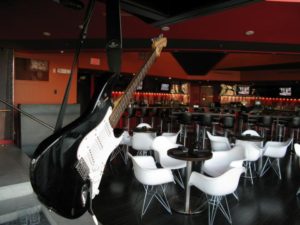 “If I’m following the logic… we’re actually being asked to give up what we’re already allowed to do, in order to get a live entertainment license that won’t allow us to broadcast [live performances] outside,” he said.

But two residents asked the board to restrict the use of the speakers.

“If the speakers are allowed to be on outside, I wouldn’t be able to sleep,” said condo owner Marilyn Lythgoe. It’s not clear if she had already been affected by the speakers, which were in use this summer.

Phyllis Bradley lives three stories above Sushi Rock. She also argued against the speakers, even though during a recent sound test, in which the outdoor speakers were in use, she acknowledged that “we did hear a sound, not even a pin drop.”

“If that’s how it’s going to be when they get their permit, I have no objections,” she said. “But I don’t think so.”

Hudgins argued that the board was setting policy that wasn’t backed up by evidence.

“I hope we’re making a decision based on reality and not perception,” he said.

“I don’t know why we’d be putting a limit on it, until and unless it’s a problem,” he said, before reluctantly voting for a compromise that pushed the weekend speaker shut-off time from 10:00 to 11:00 p.m.

“To me this location is a little different… than being in the heart of Clarendon,” said board member Mary Hynes. “There are residences in a number of locations relative to this restaurant.”

“It seems to me allowing [outdoor music] until 10:00 isn’t an unreasonable thing given the other concessions that are being made,” agreed board member Chris Zimmerman.