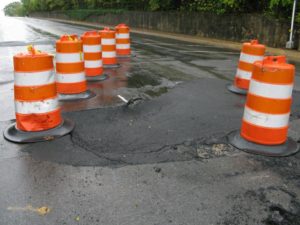 Utility relocation work along Columbia Pike in the Barcroft area has been delayed after workers discovered conflicts with pre-existing underground utilities.

As a result, the project — which started last summer and was originally slated to take 15 months — has been prolonged by an estimated three months. Planners will now have to redesign the relocation process. Work is not expected to resume until “late spring,” according to a letter from the county to local residents and organizations.

The delay will also affect the Metro and ART bus stops that were closed and relocated as a result of the project.

Separately, the county announced that it’s working to repair the torn-up and uneven stretch of the Pike between Four Mile Run Drive and South Wakefield Street. However, cold temperatures are expected to keep the necessary asphalt work from being completed until mid-February.

Residents have been complaining about the potholes and sinkholes and other car-rattling pockmarks in the roadway.

“Right now the road is in a very bad state,” said Takis Karantonis, director of the Columbia Pike Revitalization Organization. “Folks have complained often to us.”