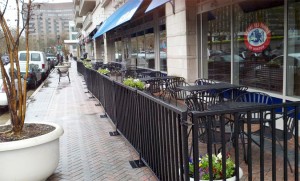 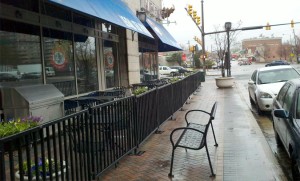 The outdoor seating area has “taken over almost the whole sidewalk on 23rd Street,” an anonymous reader tells ARLnow.com. “The pedestrian area is now down to a single file lane to get past the restaurant. The other restaurants on that part of 23rd have not pushed their outdoor seating out that far… what gives?”

“I walk to work every morning and somedays I have to either walk in the street or wait for people walking the other way to get by,” the tipster added. “That has to be against code doesn’t it?”

We couldn’t reach anybody in the zoning office to confirm whether Legal is in violation of the law, but generally county ordinances require a minimum six-foot clear passage zone on Arlington sidewalks. Clearly, the above photos show that that standard is not being met in this case.

Update at 4:45 p.m. — It’s possible that the building owner may own the sidewalk in front of Legal, in which case they would be able to do pretty much whatever they want with it, as far as the county was concerned. The federal Americans with Disabilities Act, however, requires that sidewalks maintain a minimum width of three feet on a contiguous basis.