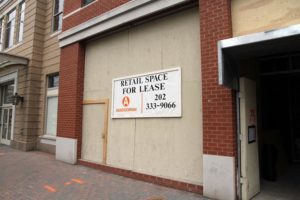 Pinkberry, arguably the originator of the upscale froyo craze in the United States, is planning on opening a location in Clarendon. According to the company’s web site, the store will be located at 1220 N. Fillmore Street.

The only open storefront in the 1220 N. Fillmore Street building is the one facing Clarendon Boulevard with the “for lease” tacked on large sheets of plywood. The storefront (pictured) is between Restaurant 3 and the future Cava Restaurant to the right, and the entrance to an apartment building, Urban Halo salon and Gold’s Gym to the left.

Pinkberry has a “cult-like” following in other parts of the country, but it will face tough competition in Clarendon. A Red Mango froyo store is only one block away and has enjoyed considerable success since it opened nearly one year ago. Rabbit, a hybrid salad/frozen yogurt/cupcake concept, is slated to open one block up Clarendon Boulevard, in the Clarendon Center development. Meanwhile, Sweetgreen — another froyo/salad restaurant — recently opened in Ballston.

We’re awaiting word from Los Angeles-based Pinkberry as to when they hope to open. Although a construction crew was busy working on the interior of Cava next door, the sound of nails being hammered into wood could seemingly be heard in the potential Pinkberry storefront earlier this afternoon.

Pinkberry is planning to open a location in Dupont Circle in the District within the next three weeks.