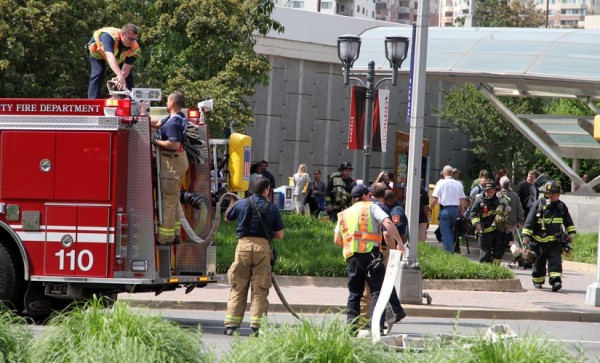 Smoke at Crystal City Metro Station — Firefighters from Arlington, Alexandria and Fort Myer responded to a report of smoke on the mezzanine level of the Crystal City Metro station around 3:30 p.m. yesterday. The smoke, it turns out, came from a faulty elevator belt, not from a fire. Just as quickly as they arrived, firefighters packed up their gear and headed back to their stations.

More Costs for Arlington Energy Plan — It will cost almost $500,000 in consultant fees and staff salaries to implement Arlington’s ambitious Community Energy Plan over the next year. The plan, which is designed to reduce the county’s greenhouse gas emissions, is up for adoption by the County Board on Tuesday. [Sun Gazette]

Alexandria Mulls Bikeshare Plan — Alexandria is thinking about spending $400,000 to place six Capital Bikeshare stations and 54 bicycles in Old Town and the Carlyle neighborhood. The plan has the potential of allowing CaBi trips between Crystal City and Old Town, but critics are questioning whether the plan is “a waste of money.” [Alexandria Gazette Packet]

Arlington Remodeler Honored — Rocker-turned-remodeler Michael Sauri has been named one of the “big 50” remodelers nationwide by Remodeling Magazine. Sauri, an Arlington resident, is the owner of Clarendon-based remodeling firm Tri-Vista USA. [PR Web]