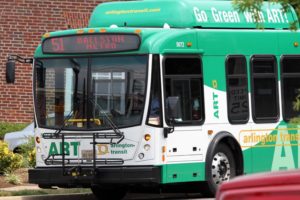 In a statement, Forsythe said the drivers were fired for violating a clause in their contract that prevented them from striking unless the company violated terms of an arbitration.

“We knew that this could happen, but we were surprised by the number of terminations,” Arlington County Transit Bureau Chief Stephen Del Giudice told ARLnow.com. “It’s a regrettable situation all the way around… It’s regrettable that drivers took the job action, and its regrettable that Forsythe felt the need to terminate the employees.”

Del Giudice said that the county was “not a party to the contract between Forsythe and its drivers” and therefore was limited in terms of what it could do to help resolve the conflict.

“It would be inappropriate for us to interfere in their labor relations,” he said.

The initial service disruption caused by the sudden strike last Monday was quickly resolved as Forsythe managers stepped in to handle the routes of striking drivers. The company then went on a hiring spree to fill the bus driver positions left vacant by the strike. Full service was restored by Friday, Del Giudice said.

One of the new drivers was involved in a minor accident yesterday, but Del Giudice said that the new hires are all licensed and experienced bus drivers who have been drug tested and “given training in Forsythe’s operating procedures and our [ART] routes.”

“We’re going to continue to insist on Forsythe providing the highest standard of safe and reliable service for our customers,” Del Giudice said.