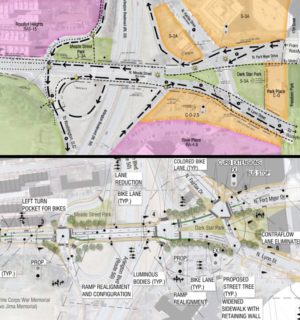 The policies, outlined in a New York Times article, include “making it harder and more costly to park… capping the number of parking spaces in new buildings rather than providing minimums… slowing cars down and closing streets to cars altogether and creating pedestrian plazas… synchronizing signal priority for people and transit, not cars… and giving people on foot the right to cross a street anywhere they like.”

“By following these examples we can make the Washington, DC region an even greater place to live,” Hamilton concluded.

Arlington’s stated transportation policy is to focus future street improvements on facilities for pedestrians, bicyclists and transit riders. One example of this in action is the the proposed improvements to the Meade Street Bridge in Rosslyn. The current plan, as outlined at a public meeting last week, calls for the addition of dedicated bicycle lanes, the conversion of a free-flowing off ramp from westbound Route 50 to a square intersection and the addition of two traffic signals on either side of the bridge

If the choice is limited to pro-car or pro-bike-and-pedestrian policies — as opposed to policies that attempt to benefit both cars and alternative transportation choices — which would you support?