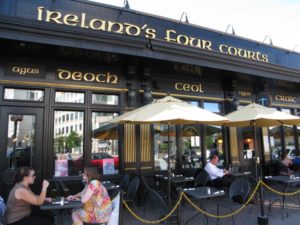 (Updated at 2:55 p.m.) More than three months ago, fire ravaged Ireland’s Four Courts (2051 Wilson Blvd) in Courthouse. But like a phoenix, the pub is about to emerge from the ashes.

The February fire gutted the kitchen, back halls and roof, forcing the pub to resort to a limited menu of mostly cold foods. Only being able to open a portion of the restaurant meant they were bringing in about 40 percent of the usual business.

The damage was more significant than anticipated, requiring many repairs in order to reopen. General Manager Dave Cahill (who hails from Limerick, Ireland) says that prompted the decision to redevelop and modernize the entire pub. Some of the changes include new hardwood and tile floors, new wood paneling and paint on the walls, a new main bar, a redone party area and the addition of a deck in the back. There are also new beers on tap, new glassware to be used with each specialty beer and an expanded scotch and whiskey list. 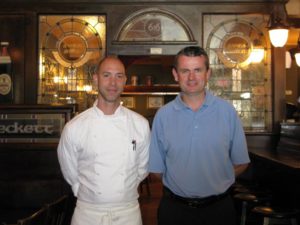 Four Courts also hired a new chef — Joel Lucas — who had previously worked at McCormick & Schmick’s and Chef Geoff’s. He’s been developing an updated menu. Lucas and Cahill said they will still serve the standard Irish dishes that Americans are familiar with, like corned beef and cabbage. However the revamped menu will include new items, several of them reflecting Ireland’s seafood offerings, such as scallops or salmon.

Lucas pointed out that the pub features “from scratch cooking” and fresh produce grown locally in Virginia. Customers will also see gourmet cheeses made at Cahill’s family farm in Ireland topping some dishes.

Despite all the changes, Cahill stresses that Four Courts will still have the same feel of a traditional Irish pub, but with a fresher look. He and Lucas have spent a lot of time and money studying pubs in Ireland, trying to mimic specific points of authenticity in both ambiance and fare.

“We want people to feel like they’re actually in a pub in Ireland when they come here,” Cahill said.

Tomorrow, Ireland’s Four Courts will start serving its expanded menu. A full grand re-opening is scheduled for August 31. The Four Courts website has the pub’s new hours and menu. More photos, after the jump.

END_OF_DOCUMENT_TOKEN_TO_BE_REPLACED

More Stories
Deal of the Day: $9 for $20 of Food at Faccia LunaMoran Votes ‘No’ On Debt Deal