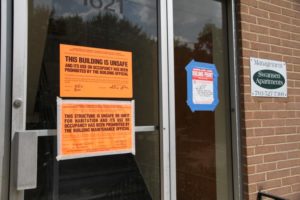 First they were forced to flee their apartments as the ground around it slid into a huge construction pit. Then they were told that the money to pay for their hotel rooms was being cut off. Now, about 30 residents of the Swansen Apartments, at 1625 N. Ode Street in Ft. Myer Heights, are being evicted from the still-condemned apartment building, as a three-way legal battle brews.

What started on Aug. 7 as a construction site mishap — the failed retaining wall, the muddy landslide, the threat that the apartment building might collapse — has gone from bad to worse for the Swansen residents, who say they were being told as late as Aug. 23 that they would be able to move back in to their Rosslyn-area apartment building.

That all changed on Aug. 26, residents say, with an email from landlord Mark Swansen.

Currently, the building has been condemned by Arlington County due to the failure of sheeting and shoring on the adjacent construction site which has damaged gas lines as well as the property on the north side of the building… You should make alternative living arrangements in light of the uncertain status of the building. No rents will be due commencing in September and we encourage you to utilize the rent monies to find new living arrangements. At this time, due to this unfortunate and unexpected turn of events, we do not have a reasonable timeline for when the building will be put back into a usable, safe and satisfactory condition, if ever. It is unfortunate that it has come to this, but your safety is our primary concern. Please make arrangements to remove any belongings from the building directly through this office.

The email, obtained by ARLnow.com, was copied to three email address from the D.C.-based law firm of Braude & Margulies, which specializes in construction law. Swansen declined to comment on the email when reached by phone, and has not responded to subsequent requests for comment. 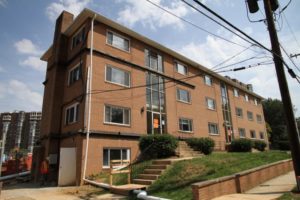 The apartment building’s gas lines must be turned back on before residents can be allowed back in, according to Arlington County Inspections Services Division Chief Shahriar Amiri, but residents say that necessary gas line work has been held up thanks to wrangling between Swansen, Clark Construction and developer JBG.

“The tenants… are likely being used as pawns in their legal maneuvers,” said the relative of one resident. 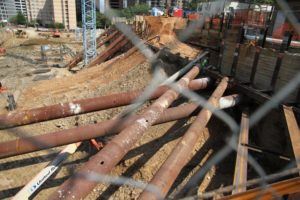 Swansen residents say they’ve been given until Sept. 24 to move their belonging out of the apartment. Meanwhile, they say that developer JBG, which has been paying for hotel rooms and meals at the nearby Courtyard Marriott hotel, notified them on Friday afternoon — a day before the arrival of Hurricane Irene — that they would no longer pay for the hotel after Tuesday morning. Later, JBG sent an email saying they were pushing the checkout date back a week, to Sept. 6.

Finding a new apartment in the area at that’s as affordable at the Swansen Apartments is providing to be very difficult, residents say.

“The issue here, is that our building was super affordable, and quite a steal for the area,” one resident said. “The neighborhood of Rosslyn easily runs for $2,000 for a one bedroom, and over $1,900 for a studio. This is about $600 more than what I was paying for the apartment with Swansen.” 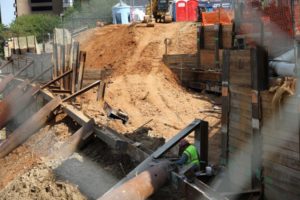 “Most of us are young professionals, some of us are in grad school, or applying for grad school. I love Arlington, but right now, I feel pretty helpless as to our situation,” the resident added. “It seems that there are big companies, and a certain landlord who don’t seem to care about the 30 people they just made homeless.”

Fed up with the situation, a dozen or more residents have hired local attorney Spiros Komis to represent them. Komis declined to discuss the potential case in depth, but issued a brief statement to ARLnow.com.

“The tenants of the Swansen Apartments have been permanently displaced from their homes through no fault of their own, and by what appears to be the possible negligence of their landlord and the developers of the adjoining $140 million construction project,” Komis wrote. “Fortunately, the collapse of the project’s retaining wall did not kill any of the tenants — who fled their units just as portions of the ground and parking lot sank into the project’s very deep ditch.”

END_OF_DOCUMENT_TOKEN_TO_BE_REPLACED

More Stories
Attempted Sexual Assault Near CourthouseCrime Report: …in the Back Edition