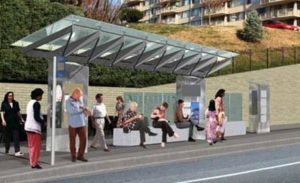 Work is expected to begin later this month on the first of two dozen enhanced bus stops that will eventually line the length of Columbia Pike.

The first of the so-called “Super Stops” will be built at Walter Reed Drive and the Pike. Work on two other stops — at Columbus and Dinwiddie Streets — is also expected to begin this fall, with a fourth Super Stop expected to be built at Barton Street, near Penrose Square, during the spring of 2012. Combined, the four stops serve more than 2,000 passengers per day.

“Super Stops are the bus stop of the future,” County Board Chairman Chris Zimmerman said in 2008, when the stops were first announced. Plans to offer WiFi internet access at each stop has been scrapped due to advances in smartphones and other consumer technology, according to county spokeswoman Shannon Whalen McDaniel.

While the new stops are under construction, existing bus stops will be relocated to the other end of the block.

Update at 12:55 p.m. — WMATA will oversee construction of the stops, with Arlington and the federal government footing the bill, which is estimated at $2.15 million first the first three stops. Of that, $430,000, or 20 percent, will come from the county while the rest will come from federal highway funds, according to Whalen McDaniel. The remainder of the project will be about 90 percent funded by federal and state grants, with the rest coming from the county.