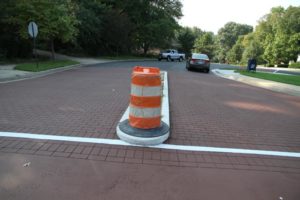 Last month, with little fanfare, construction crews arrived in the Chain Bridge Forest neighborhood. By the time they left, the neighborhood’s main thoroughfare, N. River Street, had two new medians strips, two new speed humps and a trio of intersections enhanced with “nubs” that jut a few feet out into the street.

The changes, designed to slow down drivers on a wide, downhill portion of River Street, can hardly be described as “drastic.” But the two-plus year neighbor vs. neighbor vs. county battle that preceded it can be.

Emails obtained under the Freedom of Information Act by opponents of the traffic calming measures reveal that the fight got so nasty, the acrimony even spread to county staff.

“These people have got to get a life. ‘Inherently unfair.’ Seriously? My 6 year old used the unfair complaint the other night when whining about bedtimes,” a county transportation official said of the opposition’s complaints, in an internal email to a colleague. “I’m sure the residents of extreme North Arlington are routinely disenfranchised. Perhaps they should talk to the Department of Justice about election monitoring and human rights violations.” 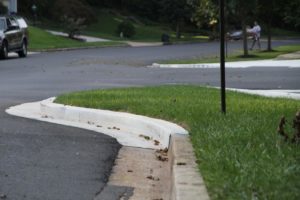 But Chain Bridge Forest Homeowners’ Association president Terry Dean, who filed the FOIA request, insists that her group — representing 124 households — had legitimate concerns about being left out of the voting process that cleared the way for the traffic calming. In the end, only the 35 households closest to the River Street changes were asked to vote, instead of the neighborhood at large, Dean said.

“[Arlington County] didn’t believe in participatory democracy… basically, they wanted to do what they wanted to do, and it really didn’t matter what the neighborhood thought,” said Dean, a former congressional staffer. “You see that in banana republics, but it’s not supposed to be happening four miles from the Capitol.”

(Twenty-seven of the 35 households voted in favor of the changes, though Dean says a few votes were miscounted.)

Dean insists that from the outset, nobody was opposed to the idea of speed humps on River Street — the original plan when the neighborhood asked for traffic calming measures. It’s only when the county decided to take the traffic calming further — reconfiguring the entrance to River Street from Glebe Road while adding median strips and curb extensions in an effort to “define the travel lanes, slow traffic and improve pedestrian safety” — did the opposition start to organize. 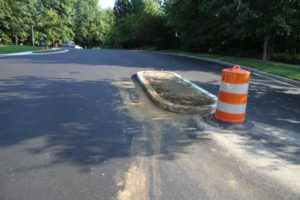 County staff argued that River Street is too steep between 38th Place and 39th Street to install additional speed humps, and said that the reconfigured entrance off of Glebe Road was necessary to convey to drivers that they were entering a residential neighborhood. Opponents, meanwhile, started to question the necessity and nearly $200,000 cost of the changes, given that the average speed on River Street was clocked at 27 miles per hour. About 15 percent of cars were clocked going more than 32 miles per hour, and attempts at speed enforcement by police yielded only four tickets in five hours on one day, and not a single ticket on another day. One county employee referred to the latter enforcement effort as a “fishing expedition” in an email

“They are more concerned about these obstacles in the middle of the street” than they are speeding cars, she said. “I have no doubt someone’s going to hit that median once we have ice and snow on the ground… We hope and pray that nobody will get hurt.”

“From an aesthetic point of view it’s ugly as the dickens… a big, ugly mess,” Dean added.

According to statistics cited by Dean, there have only been three significant accidents on the Arlington County portion of River Street in the past five years. One involved a man who died of a medical emergency while driving; his car ran off the road. Another involved an intoxicated woman whose car ran into a yard on 39th Street. The other involved a woman who was leaning down to pick up a cell phone and drove into the curb, spinning her car. Nobody else was injured in the accidents, Dean said, noting that traffic calming would not have prevented any of the accidents and that traffic calming supporters were “hyperventilating in terms of the danger to their children.”

But another opposition argument seems to have fallen flat. Opponents predicted “compromised accessibility of large vehicles” like school buses. In the FOIA documents, however, the fire department said it would have no problem navigating its big fire engines around the medians and curb extensions. And the hour ARLnow.com spent taking photos revealed no accessibility problems, save a black stretch Ford Excursion limo that tried and failed to navigate around the median at Glebe Road — seemingly the result of a poorly-chosen angle of approach.

Dean said that the medians and curb extensions were actually trimmed back at the Glebe Road entrance due to intervention by VDOT. That, she says, has improved things a bit. Still, she and fellow homeowner’s association members plan to continue fighting. The county now wants to install a street light at River Street and Glebe Road — to allow drivers to  see the newly-installed medians — and Dean says they’re going to fight it on the grounds that some of the necessary equipment needs to be installed on homeowner’s association property.

In the end, though, Dean says she hopes the Chain Bridge Forest community, now divided, put aside their differences and resume neighborly relations.

“The community needs to get past this and come together, but calling people names… is not going to get us there,” she said. “That just needs to stop… you can’t be rude to your neighbors all the time, it will come back to haunt you.”

Dean added that she has been in touch with residents of Arlington Ridge, which recently went through its own acrimonious fight over a traffic calming project.

“Arlington, as a county government, shouldn’t be setting up situations like this,” she said.