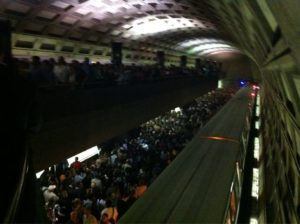 Just before 5:00 p.m. on Tuesday, Oct. 11, a man was struck by an outbound train at the Clarendon Metro station, throwing the evening commute into chaos.

As rescuers worked to free the man from underneath the train, power was shut off to the third rail and trains were stopped around the station. With almost nowhere else to go, Orange Line trains started offloading passengers at Rosslyn. Soon, the Rosslyn station started filling up with people — so many people that the escalators were shut down so they wouldn’t become overloaded.

Shortly after that, police were called in to help with crowd control. Via police radio, officers expressed concern that the crowds were so heavy on the platforms that people might start falling onto the tracks. Later, a mass casualty medical response was dispatched to the station as people started getting ill while trying to walk up the long escalators.

Many riders that night expressed complaints about a lack of communication and direction from Metro personnel at the Rosslyn station. After a two-week review, however, Metro has concluded that while some mistakes were made, the shutdown was, in fact, handled well.

How would you grade Metro’s overall response on Oct. 11?