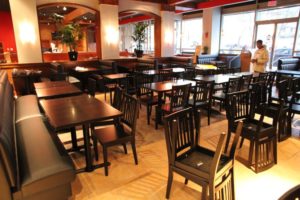 “Memphis Barbeque will feature a menu of finger licking, barbequed meats, fish and shellfish,” the restaurant said in a press release. “Meats will be slow cooked over hickory wood from two smokers and finished with a selection of tomato and vinegar based sauces.”

The nearly 5,500 square foot restaurant features a 54-seat bar and a 170-seat dining room, in the storefront once occupied by Mackey’s Public House. During warm weather months, Memphis Barbeque plans to have a 48-seat outdoor patio.

George’s 20 years of restaurant experience includes managing upscale restaurants in Atlanta, Memphis and Los Angeles. The Memphis, Tenn. native counts his father Dr. William George, a Memphis business leader and ordained minister, and his sister Yolanda George Turman, who works in bio-pharmaceutical sales, as partners in the new restaurant. Redrick Rayborn, the “pit master” for Memphis Barbeque, just moved to Arlington from Memphis, where he managed a Corky’s Ribs and Barbeque location.

While feature photography and artwork from the city of Memphis will adorn the walls of the restaurant, the eater’s real star will be the food. From the press release:

The famous Memphis Style Spare Ribs are prepped either “wet” and basted with Memphis original Bar-B-Q sauce or “dry” and prepared with a special sauce and dusted with a proprietary rub.  Guests can also choose a combination plate of ribs and either Bar-B-Q Chicken, Pulled Pork Shoulder, Beef Brisket or Spicy Bar-B-Q Shrimp. Plates are priced at $11-26.  Entrée offerings from the sea include Bar-B-Q North Atlantic Salmon, Spicy Bar-B-Q shrimp and the Grilled Hickory Fish of the Day.  Each entrée is served with the choice of two sides and options include Buttermilk Battered Onion Rings, Baked Four-Cheese Macaroni and Cheese, Barbeque Baked Beans and Creamy Coleslaw.

A number of starters like Pulled Pork Eggrolls, soups and salads including Bluff City Chili and Beef Brisket with Mixed Greens, Roasted Tomatoes, Candied Spiced Pecans and Panko Crusted Goat Cheese are also offered ranging in price from $9-$12.  Sandwiches are served with one side as yet another option.  Choices include the vegetarian Veggie sandwich made with marinated and grilled Portobello mushrooms, roasted tomatoes, peppers, Montrachet cheese and basil-pesto mayo and the Pulled Pork Sandwich made with meat smoked in-house for 20 hours.  For those who still have room, enticing desserts including the Blondie Brownie Sundae are also available and are priced from $8-$9.